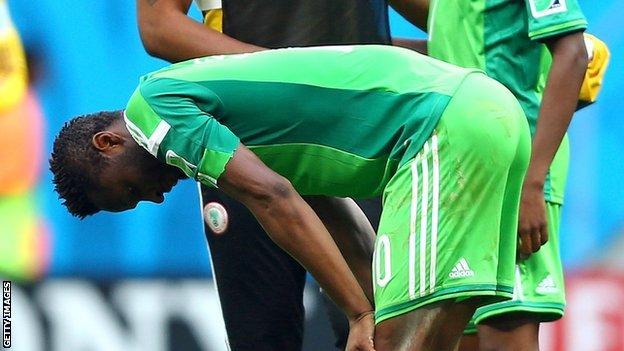 Reigning Africa Cup of Nations champions Nigeria will not defend their title in Equatorial Guinea after failing to qualify from Group A.

In Wednesday's final round of matches, Nigeria were held 2-2 by South Africa in Uyo, meaning they finished outside of their group's top two automatic qualification spots with eight points - a total that also put them out of the running to be the best third-placed team.

South Africa had already assured their place at the tournament, which will be played from 17 January to 8 February.

Congo Brazzaville, Ivory Coast, Ghana, Guinea, Mali and DR Congo all claimed their tickets to the continent's showpiece event with their results on Wednesday.

Nigeria went into the game against South Africa with their fate in their own hands - win and they would claim second spot in the table and a place in the finals alongside group winners Bafana Bafana.

But the Super Eagles blew their chance to prevent a troubled campaign from turning disastrous, even though they fought back from two goals down to finish with a draw.

The writing was on the wall for Stephen Keshi's side, who have been plagued by both on and off the pitch problems, when Tokelo Rantie scored a goal either side of half-time to put the visitors firmly in control.

Sone Aluko pulled a goal back on 68 minutes and Nigerian hopes were raised further when South Africa's Renielwe Letsholonyane was sent off.

In added time Aluko levelled the scores but it was too late for the home side and they once more miss out on playing in Equatorial Guinea, as they did when the country co-hosted the tournament in 2012.

Instead, the runners-up spot in the table - and a place in the finals - was secured by Congo, who beat Sudan 1-0.

Igor Nganga struck the only goal of the game after 63 minutes.

Mali made it through to the finals with a 2-0 win over Algeria, who had already won the group and booked their place.

Seydou Keita scored from the penalty spot, picking himself up to take it after he had been fouled by Carl Medjani, to give his side the lead after 29 minutes.

The advantage was doubled early into the second half when Mustapha Yatabare converted.

It was the first defeat of the campaign for Algeria, who made several changes to their starting line-up, and brought to an end the Desert Foxes' prefect record.

In the group's other match, Malawi and Ethiopia drew 0-0 - a result that ended both sides' chances of making it to the final.

Both Burkina Faso and Gabon had already qualified from the group, so the only bearing their matches had was to see who would end up as group winners. That accolade went to Gabon who beat Lesotho 4-2 in Libreville.

Burkina Faso were held to a 1-1 draw by Angola in Ouagadougou. A Djalma Campos penlaty put Angola ahead, with Jonathan Pitroipa equalising for hosts on the stroke of half-time also from the penalty spot.

Ivory Coast needed only a point from their meeting with Cameroon, who had already won the group before the game, and the pair played out a goalless draw.

Cameroon played the last 30 minutes with 10 men following the sending off of Stephane Mbia.

The Indomitable Lions captain was shown a straight red card for a foul on Gervinho on the edge of the area.

From the resultant free-kick, Yaya Toure's shot was headed off the line - the closest either side came to breaking the deadlock.

In the other match DR Congo came from a goal behind to beat visiting Sierra Leone 3-1.

The Leone Stars, who began the match knowing they had no chance of qualifying for the finals, opened the scoring on 35 minutes with a long-range effort from outside the area.

Crystal Palace midfielder Yannick Bolasie drew the sides level just before half-time when he controlled the ball on his chest and smashed home from outside the box.

Sierra Leone conceded a penalty on 62 minutes, having a man sent off as a result, and Cedric Mongongu stepped up to put the Leopards ahead.

Bolasie then scored a second to seal the win - and with Egypt losing against Tunisia later on Wednesday it meant DR Congo qualified as the best third-placed sides.

Ghana clinched top place in the group as they comfortably beat Togo 3-1.

Provider Wakaso then turned goalscorer, belting in a 35-yard shot into the top-right corner to double his side's advantage.

After the break, Floyd Ayite pulled a goal back for the visitors but the Black Stars made sure of victory when Emmanuel Agyemang-Badu made it 3-1 on 69 minutes.

The other automatic qualification spot in the group went to Guinea, who beat Uganda 2-0 in their winner-takes-all clash.

Borussia Monchengladbach's Ibrahima Traore set them on their way with a curling free-kick.

Thirteen minutes after the interval Ugandan skipper Andrew Mwesigwa was sent off when he conceded a penalty and Seydouba Soumah made no mistake from the spot.

Guinea's qualification comes despite them not being able to play any of their group matches at home because of the severity of the outbreak of Ebola in their country.

In addition, some of the players had to go against the wishes of their clubs to be able to play in the qualification matches.

With Cape Verde having already sewn up top place in the group and Zambia qualified as runners-up before Wednesday's final round of matches, they went head-to-head little at stake.

It took 77 minutes for Roland Kampamba to break the deadlock and that goal proved to be the only one of the game as Chipolopolo ended their campaign with a 1-0 win.

Niger and Mozambique drew 1-1 to finish fourth and third in the group, respectively.

Antonio Alberto Diogo opened the scoring for Mozambique but with only seven minutes remaining Niger salvaged a point.

Tunisia and Senegal had already qualified from Group G before the final round of games were played.

Senegal comfortably won 3-0 against Botswana, who finished the campaign with just one solitary point.

Egypt needed to defeat Tunisia by two clear goals to clinch a place as a third-placed finisher but lost 2-1, with DR Congo claiming the 16th and final qualifying spot.

Chelsea winger Mohamed Salah boosted Egypt's hopes early on with a goal in the 15th minute. But Tunisia fought back, first through Yassine Chikhaoui in the 53rd minute, and then with an 81st minute winner from Wahbi Khazri, leaving the seven times former champions to miss out on qualification.