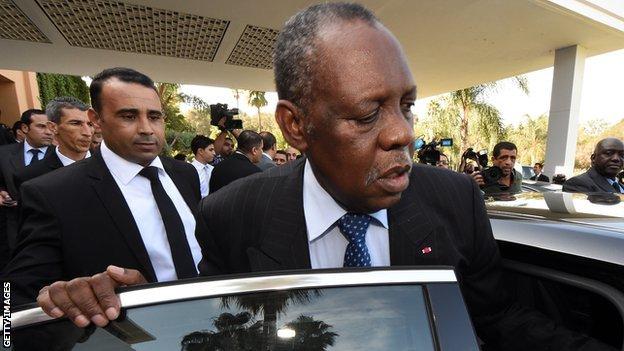 Confederation of African Football (Caf) president Issa Hayatou has sent condolences to the families of two footballers who died over the weekend.

Former Cameroon international Valery Mezague was found dead at his home in the French city of Toulon on Saturday.

The results of Monday's post-mortem on Mezague, who played at the 2004 Africa Cup of Nations, are yet to be released.

Guinean Oumar Tourade Bangoura, 19, a midfielder with local side AS Kaloum, died of a heart attack in Tunisia.

"I'm deeply saddened by this tragic death of such a young football player who was enjoying a very promising career. My thoughts go out to his family and friends," Hayatou said.

"Caf and the entire African football fraternity is deeply concerned with any such incidents of players dying on or off the fields.

"Our priority will be to enhance investment in medical research to help deal with such issues and try and forestall any such occurrences and minimise their impact."

The Guinean champions had been preparing for the new season in Sousse, and Bangoura died on the way to the hospital after suffering the attack at Tunis airport.

Mezague, meanwhile, had been playing most recently for Sporting Toulon in the French fifth division.

He had been capped seven times by Cameroon and had represented several other French clubs including Montpellier and Sochaux as well as having a loan spell in 2004-2005, with Portsmouth in the English Premier League.

"Personally, and on behalf of the members of the African football community, we extend our deepest condolences to Mezague's family, friends and loved ones on this sudden loss," Hayatou said in his message of condolence.