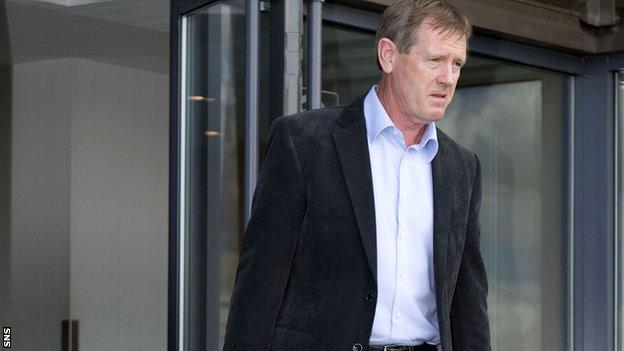 The former Ibrox director was responding to claims by Rangers chairman David Somers that King's consortium had not provided proof of funds for their investment offer.

The board subsequently accepted a £2m loan from Mike Ashley, having rejected another proposal from Brian Kennedy.

King has called on Rangers fans to act, saying: "The future of the club depends on every fan now taking a stand."

Somers had claimed that King's consortium failed to provide proof of funding for their £16m investment proposal, or the identities of all of those providing the funds.

A spokesman for the consortium described Somers' remarks as "disingenuous", adding that the group had given private assurances that all the relevant information would be provided upon acceptance of the investment proposal.

"Somers' comments are, to his knowledge, not honest," King said.

"Unfortunately, his utterances are what we have come to expect of recent appointments to the Rangers board. Fortunately the fans will not be fooled by such platitudes.

"I truly hope that those fans that continue to blindly support the club (for the right reasons) finally realise that 140 years of the club's history will be irretrievably lost unless they withhold their financial support for the current regime at matchdays and the retail outlets."

The King consortium's offer was based upon the group receiving an equity stake in Rangers International Football Club plc and control of the board. To release new shares, 75% of current shareholders would need to agree on the deal, and Sandy Easdale, the football board chairman, owns 5.2% and holds the proxies for a further 20.94%, effectively allowing him to block the deal.

A spokesman for the consortium said: "We had private discussions with Graham Wallace [the former Rangers chief executive] and Sandy Easdale in which we told them that we would immediately provide proof of funding and details of the full make-up of the consortium following confirmation from Sandy Easdale that the shareholders whom he represents were prepared to support the terms of our investment proposal in principle.

"Sandy Easdale agreed to proceed on this basis. Unfortunately he was not then able to provide the confirmation we asked for. There was no possibility of proceeding any further without the support of Sandy Easdale's group who had the power to block our proposed investment."

The board of RIFC were then faced with two loan offers, from Ashley and Kennedy, both of which would provide a short-term fix ahead of future fundraising. During lengthy discussions, and after finance director Philip Nash resigned, the board accepted Ashley's offer.

The owner of Newcastle United has since made another £1m available, with further funding required before the end of the year.

"Where [the King offer] fell down was really at stage one," Somers said. "When I said to all three of these people 'would you show me proof of funds?' two showed me proof of funds. The consortium did not.

"The second question for the consortium was 'I know there are eight of you, I only know three of you. Can I please have the other five names?' And the message I was getting all the time was 'if you agree to do a deal, if you persuade 75% of shareholders, then we'll show you funds and you can have the other names'.

"It wasn't meeting the due diligence requirements. I cannot go to shareholders when I don't know all the names, I can't check the names out and I can't put my hand on my heart and say 'these guys have the money'.

"In the end we had to move on to stage two which left two providers. Then it was a simple case of which provider was offering the lowest interest rate - Mike Ashley was offering zero interest which is difficult to beat - and which provider wanted least security - again Mike Ashley only wanted a small amount relative to the other deal. Once we got to that stage it was a no-brainer which one we were going with."