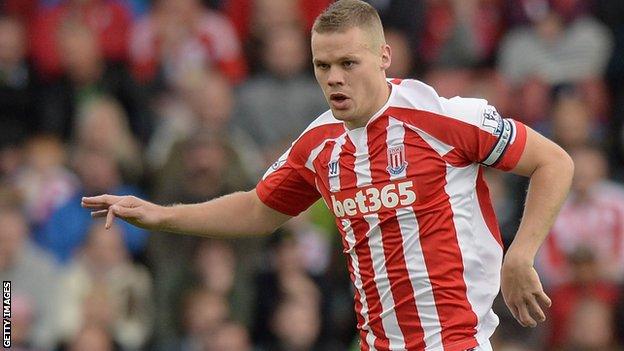 Shawcross, 27, has played in a friendly for England but qualifies for Wales having been raised and educated there.

He has said he has no interest in switching, but Welshman Pulis says it may be his best chance of playing international football.

"I'm convinced he should be in the England squad and if that's not going to happen then my attentions would be turned to crossing the border."

Shawcross played for England against Sweden in 2012, but that game was just a friendly so he is still eligible for Wales, whom he represented at schoolboy level.

Wales manager Chris Coleman invited the centre-back to make himself available to represent Wales in 2012, but Shawcross declined the opportunity.

But former Crystal Palace boss Pulis - who managed the player at Stoke - feels Shawcross should reconsider, saying he would benefit from playing international football.

"He would be joining a Wales team with a genuine chance of qualifying for Euro 2016, so there's some big games to be had if he made that choice," he said.

"I still think his best years are ahead of him. I'd be disappointed if Ryan thinks he's reached the top of his performance levels.

"He has still to reach his peak and should become better over the next four or five years."

Wales have made an unbeaten start to their Euro 2016 qualifying campaign and are second in Group B behind leaders Israel.

Chris Coleman's side have two wins and two draws so far as they bid to reach their first major tournament since the 1958 World Cup.