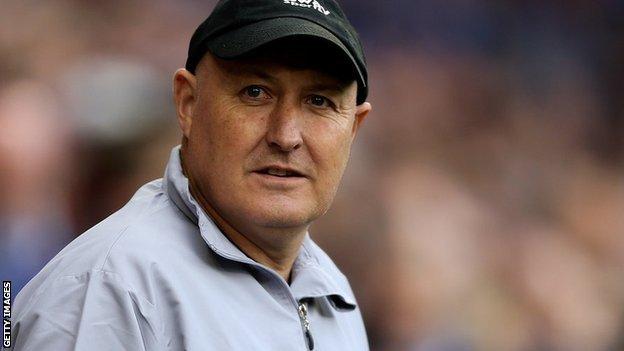 Slade said the Bluebirds were not commenting on Wigan's appointment of their ex-boss who is the subject of an on-going Football Association investigation into alleged racist, sexist and homophobic text messages.

Slade said: "The club are making no comment on that in view of the investigations that are ongoing.

"That's our take on that matter."

Asked whether he would shake hands with Scot Mackay when the two sides meet in February, Slade said: "I'll do things professionally as I always do."

A former Scotland international defender, Mackay began his managerial career at Watford in 2009 and spent two seasons at Vicarage Road before joining Cardiff.

He led the Welsh club to the 2012 League Cup final, which they lost on penalties to Liverpool, and won the Championship title a year later, ending Cardiff's 52-year exile from the English top flight.

But Mackay was dismissed in December 2013 with the Bluebirds only one point outside the Premier League relegation zone.

After Solskjaer departed in September, 2014 Slade became Cardiff manager in the following month.

The Bluebirds host Reading on Friday, 21 November and expect midfielder Anthony Pilkington to be fit.

Pilkington suffered a slight strain while on international duty with Ireland, but should be fit for the match.

Gabon Centre back Bruno Ecuele Manga and Trinidad and Tobago striker Kenwyne Jones, who is due back ahead of kick off, will be assessed before the club decides whether they are in contention to play against Reading.