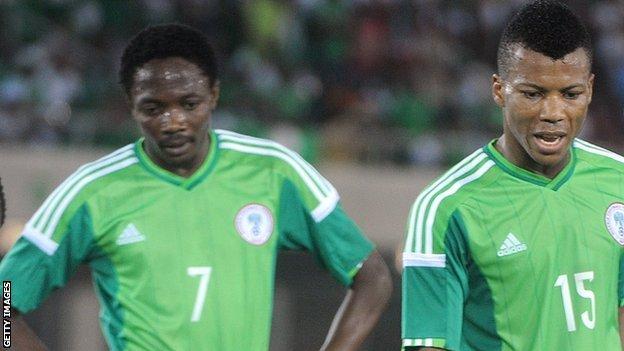 The Nigeria Football Federation (NFF) has said it accepts the blame for the Super Eagles' failure to qualify for the 2015 Africa Cup of Nations in Equatorial Guinea.

NFF president Amaju Pinnick said it was a time for sober reflection rather than looking for scapegoats.

"The NFF takes full responsibility for what has happened," he said.

"It is a tragedy for us to come so near and yet fail to reach the finals."

Nigeria suffered a troubled qualification campaign where they not only struggled with form on the pitch but also were affected by deep divisions in the NFF, while coach Stephen Keshi was in and out of the job.

Yet the team's victory over Congo on Saturday put their fate in their own hands and a win against already-qualified South Africa at home would have sealed their place in the finals.

"We made so much effort and sacrifice in Congo to achieve the victory we needed there on Saturday and really had no business bungling it here," added Pinnick.

"However, our commitment is to build a sustainable football culture in the country and nothing has changed.

"This is a disappointment but for us, we gave it our best shot and supported the team fully."

Pinnick, who had sanctioned the appointment of a foreign coach before a presidential order led to Keshi's return, said Wednesday's failure could turn out to be blessing in disguise.

"This has happened but we believe it will work together for us to toil hard and achieve a renaissance that will take Nigeria football to much higher heights than it has ever been," Pinnick's statement continued.

Under-fire caretaker coach Keshi admits his players underestimated the South Africans, who have never beaten Nigeria in a competitive fixture since 1993.

"Maybe we took South Africa for granted and we paid dearly for this." said Keshi.

"I am disappointed, everybody is disappointed," he said. "We did not get the result we wanted and we now have to pick ourselves up as a team."