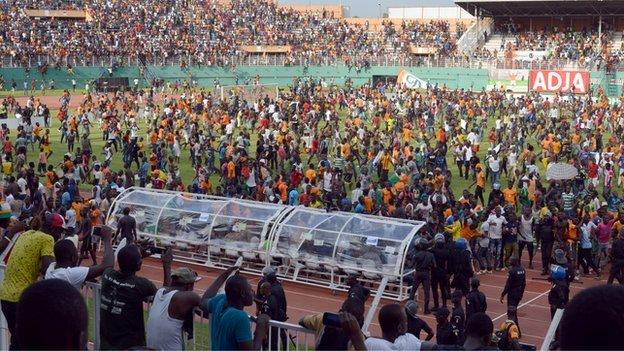 Ivory Coast could face sanctions for a mass pitch invasion by fans in Abidjan after they secured their place at the 2015 Africa Cup of Nations finals.

The incident came after the Elephants drew 0-0 with Cameroon on Wednesday to ensure they finished second in Group D.

The Confederation of African Football says it is awaiting the referee's match report on the incident.

"The incident is likely to be addressed by the organising committee on 1 December," a Caf official said.

Police struggled to restore order after fans invaded the pitch.

Pictures from the invasion at the Felix Houphoet-Boigny stadiums showed fans apparently being beaten by security forces and also one fan trying to rip off Gervinho's shorts.