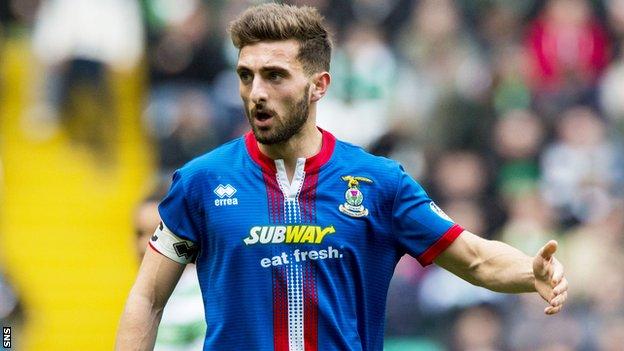 Inverness Caledonian Thistle manager John Hughes says the agent of defender Graeme Shinnie has been "unprofessional and disrespectful" towards the club.

Shinnie, 23, who is out of contract at the end of the season, has rejected Caley's offer of a longer term deal and has been linked with other clubs.

"Can we spin the plates to see what we can do for him? That's what we're trying to do right at this time."

The left-back has captained the Highlanders in the absence of Richie Foran so far this season and has been with Inverness since 2009.

Hughes confirmed Aberdeen had shown interest in the player while a number of English clubs have made enquiries.

"It [the speculation] has come from his agent and it's very unprofessional and very disrespectful to everyone concerned at Inverness, especially with the relationship that Graeme's got with the club.

"Nine times out of 10 on that pitch he's man of the match. He's been outstanding.

"I feel he's got another year to go here in terms of learning the game.

"There's been enquiries, there's no point hiding it - he's had that good a season.

"A lot of clubs go into trouble because they give out too much money. We have to be careful with that."

Inverness are level on points with Scottish Premiership leaders Celtic going in to Saturday's meeting with Motherwell.

"It's going to be a real tough football match," Hughes said. "Motherwell are in a false position (third bottom) and through that they've lost confidence and momentum."

Motherwell are still seeking a new manager after the departure of Stuart McCall, an appointment that has been postponed while the club seek new ownership.

But Hughes sees no advantage in Motherwell's predicament.

"I think it's a disadvantage," he explained. "Sometimes through all that upheaval it really galvanises and brings you together.

"They'll be coming up here to try and take our scalp. We're unbeaten at home and hopefully that'll still be the case come 17:00 GMT on Saturday."