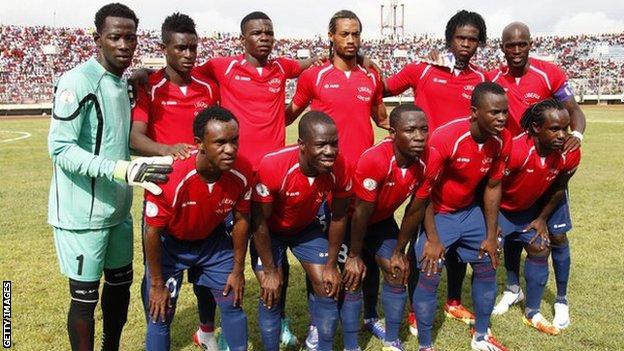 Newly-appointed Liberia coach James 'Salinsa' Debbah says he wants the Lone Star squad to change their attitude and approach under his guidance.

The former international, who signed a three-year contract on Friday, has promised a no-nonsense approach.

"We intend to use a more professional approach to instil discipline in the team and everybody will have to follow my instructions," he told BBC Sport.

"There will be no free meals under my watch, so every player has got to earn their red, white and blue shirt," Debbah added.

"My main goal is to recruit and develop local talents from the annual county sports meetings and the domestic league.

"But as you know we can only do that when the country has been declared Ebola free.

"In the interim, we will be put together strategies and action plans for how we intend to go about this national assignment when the 'green light' has been given by health authorities and the FA for us to start work."

Liberia suspended all football activities in August in order to help prevent the potential spread of Ebola through bodily contact on the pitch and the gathering of large crowds at football matches.

Debbah has a wealth of playing experience having spent time in France for Monaco, Lyon, Nice and PSG as well as in Belgium with Anderlecht before retiring in 2004 with Al-Jazira in Abu Dhabi.

However, his only coaching role so far is with his Liberian club Mighty Barrolle.

Meanwhile, his former team-mate Christopher Wreh, who played for English club Arsenal, has been appointed to take charge of the Under-20 team.

Wreh hopes to raise the profile of Liberian football by producing quality players to feature for the national side.

Liberia have never reached the World Cup finals and only ever been to two Nations Cup tournaments in 1996 and 2002.