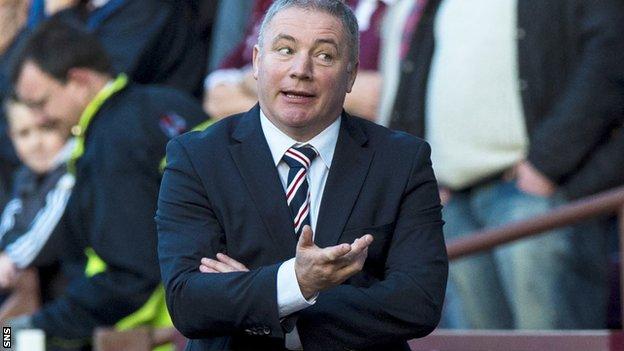 Former Rangers coach John Brown says it is the players and not manager Ally McCoist who should be taking the brunt of criticism from supporters.

But he believes McCoist has shown before he can overcome the abuse from a section of fans to succeed at Ibrox.

Rangers fell nine points behind Hearts after losing 2-0 to the Scottish Championship leaders at the weekend.

"Ally's got the strongest squad in the division and it's up to the players to step up to the mark," said Brown.

"You can criticise the manager, but a lot of the senior players, international players, have not been pulling their weight and it's time they did something about it.

"I still believe with players like Kenny Miller, Kris Boyd and Lee McCulloch, experienced guys, they've got to go and show a bit more to bring the team on.

"Lewis Macleod's a young promising player, but he needs a lot of support from a lot of senior players who are just not pulling their weight this season.

"You run for your team-mates, you go that extra yard and I don't see that with some of these players.

"It's about time they stood up to be counted, rather than letting the manager take the flak."

McCoist joined Rangers as a player in 1983 but initially struggled for form and he was subjected to abuse from his own support during a game against Dundee in 1985, when Brown scored the winner for the Dens Park side.

Brown later became a team-mate of McCoist's at Ibrox as the striker went on to ensure legendary status as top goalscorer in Rangers' history.

"I remember in the mid-80s under Jock Wallace when he was getting abuse, but he was there at the target end to miss chances, getting abuse and a lot of the other players in that period, famous names, weren't at the races," Brown told BBC Radio Scotland's Sportsound programme.

"But Ally always put himself out there to be shot at and he's man enough to handle any situation. He has done it once and will do it again.

"This is his third season, he's had back-to-back titles. We're only in November and prizes don't get dished out until April or May.

"I'd say to the fans to stick with it. He's been given the task to get consecutive promotions and it's still there, it's still achievable."

Brown thinks that supporter disquiet at the way the club is being run by a board they do not believe they can trust has had an adverse effect on both the players and their followers.

"A big part of the unhappiness is the whole state of their football club - the way it's been run from the board and everything that's gone on at boardroom level," he said.

"The one that gets the brunt is Ally, he's out there, he's speaking to the press and it's a hard task.

"I've been to games where, because the fans are not happy with the board, that transfers on the park as well."