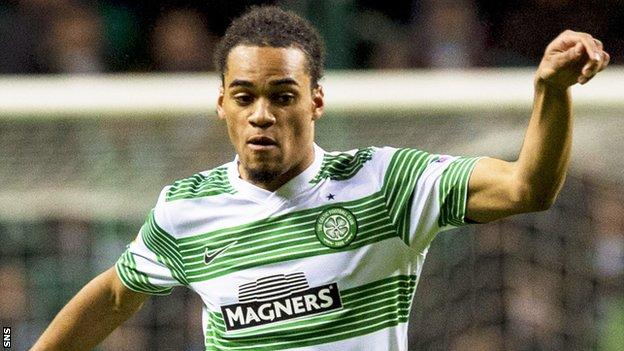 Jason Denayer believes Celtic are capable of winning the Europa League - if they play to their full potential.

Assistant manager John Collins has cautioned that there is a long way to go to reach that level.

But defender Denayer said: "I think we can reach the final or semi-final. It depends who we play. But, if we play 100%, we can win this tournament."

The Scottish champions could qualify for the knock-out stages with even a draw if third-placed Dinamo Zagreb fail to beat Astra in Romania.

However, Denayer stressed: "It's important to qualify from this game. After that, we go away to Zagreb and everybody knows it will be difficult to play there."

The on-loan Manchester City defender picked up a knock in Saturday's 2-1 win over Dundee and was replaced at half-time.

Denayer is hopeful of recovering fitness in order to renew his battle with Salzburg striker Jonathan Soriano, who scored the Austrian side's second equaliser when the teams drew 2-2 in September.

"He's a very good player and a good opponent," he said. "He is the best one I have played against."

Collins warned that Salzburg's team-work was a major danger.

"Salzburg are a good team," said Celtic's assistant boss. "They play some high tempo football and love to press.

"They are probably one of the best - if not the best - pressing team in Europe.

"They don't give you a second on the ball and are always looking to pass forward.

"It will be a new challenge for us. It's something we don't get in Scotland. Most teams sit off us here, so it is the exact opposite."

Collins stressed that progress to the knock-out stages had implications for Celtic's ability to attract new signings.

"It is vitally important that we qualify," he said. "If we are looking for players in January and next summer, they will want to play in Europe.

"Good players want to be involved in the Champions League and Europa League. They don't just want to play domestic football. So it is really important that we qualify.

"Is it our biggest selling point? Yeah, it's very difficult to get top players if you are not in Europe."

Collins was more downbeat than Denayer about Celtic's chances of winning the trophy, especially as teams who fail to qualify for the Champions League knock-out stage drop into the last 32 of the Europa League.

"I would love to win it, but there are lots of good teams and lots of good players left in the competition, so one step at a time," said the former midfielder who reached the Champions League semi-finals with Monaco.

"We have to qualify for the knock-out rounds first and then see where that takes us."