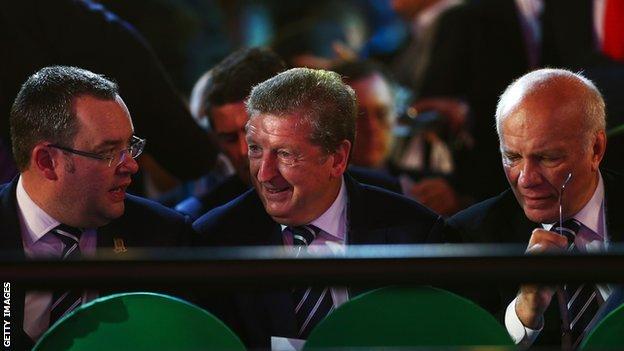 The Football Association says it has no intention of boycotting the 2018 and 2022 World Cups in Russia and Qatar.

But FA general secretary Alex Horne insists England will not use the threat of withdrawal to put pressure on Fifa.

"The World Cup is a fantastic tournament and we want to be playing in it," he said.

"To link the two issues is extreme. I don't see us boycotting the World Cup."

Triesman, who was initially appointed chairman of England's unsuccessful bid to host the 2018 World Cup, said world football's governing body Fifa would only root out possible corruption if pressured to do so by its European counterpart Uefa.

"I think Russia will resist it, but the fact is that the most powerful of all continental football groups is in a position to influence [Fifa]," the 71-year-old told Sky Sports.

Fifa released a 42-page summary report on 13 November into alleged corruption regarding the bidding process for the 2018 and 2022 tournaments which cleared Russia and Qatar of corruption.

Garcia and Fifa ethics judge Hans-Joachim Eckert have now agreed to allow the head of Fifa's Audit and Compliance Committee, Domenico Scala, to access all of their findings.

Scala will then decide whether the full investigation is passed on to Fifa's Executive Committee, leaving the door open to a possible re-vote.

Fifa general secretary Jerome Valcke admits that the row over the report has damaged the organisation's standing, and that it may take many years to restore its credibility.

"The image of Fifa is something that I agree, over the past two weeks, has - I will not say reached the bottom - but has reached a level which is definitely a level which will not go lower than that," he said.

"We have to rebuild this image day after day. It's easy to destroy the reputation, it takes one second. It takes years to rebuild our reputation but that is what we will do."