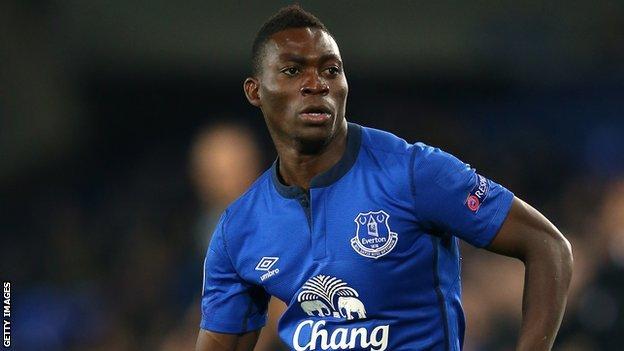 Ghana international Christian Atsu has admitted he needs to improve to make his mark in English football.

The 22-year-old striker has made only three starts this season for Everton, where he is on loan from Chelsea.

"I have to do more in games but in football these things happen," he told BBC Sport. "I am not frustrated, I know you will have bad and good moments.

"Sometimes it happens for a full season and then the next season you can be better - I'm working hard."

Atsu joined Chelsea in September 2013 but was first loaned to Vitesse Arnhem in Netherlands, where he went on to be voted player of the season by the club's fans.

But since his return to the English Premier League and his loan move to Everton he has looked out of sorts - in seven appearances for the Toffees, including four as a substitute, he has failed to score.

His form has also dipped for Ghana during their recent Africa Cup of Nations qualifiers - a stark contrast to his good performances at the World Cup in the summer.

However, Atsu insists that he is content at Everton and expects to turn things around.

"I am very happy with the club. This is my first season in the Premier League so things are very difficult and I am hoping as time goes on it will get better and it will become much easier," he added.

"I am not worried at this stage that I am not playing. For me my dream was to play in England so there is nothing to worry about.

"As a player I am working hard to play each and every game."

Atsu revealed he has been delighted with the support of his club manager Roberto di Matteo and especially Cameroonian striker Samuel Eto'o, who is also at Goodison Park.

"It is a great honour to play in the same team with players like Eto'o and (Romelu) Lukaku and those great guys at Everton," he added.

"Training with them gives me a lot of confidence, they always encourage me in training, especially Eto'o.

"He always tells me you have to keep working and that he went through these kind of situations to achieve his aim of becoming one of the best players in the world and has been helpful so far.

"I take a lot of inspiration from that."