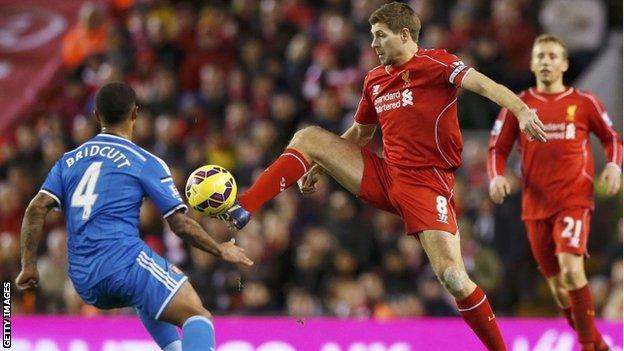 Liverpool failed to build on their midweek triumph at Leicester City after a drab home draw with Sunderland.

Steven Gerrard was rested, perhaps with one eye on Tuesday's must-win Champions League game with Basel, but the hosts struggled without their captain.

Liverpool's Raheem Sterling had a late penalty appeal turned down but Sunderland were good value for a draw.

It took the home side 17 minutes to win their first corner and it was a further six minutes before they registered their first effort on goal, when Rickie Lambert headed well wide and combining with former Southampton team-mate Adam Lallana.

Liverpool were missing Gerrard's drive and, when he was sent out to warm up by Rodgers before the half-hour mark, he was met with rapturous applause from a previously slumbering crowd.

Things could have got a lot worse for the hosts when, in the last action of a turgid first half, Brown rose unmarked to meet Sebastian Larsson's corner, but the former Manchester United nodded the glorious chance over the bar.

The visitors came out firing after the interval and should have taken the lead when Wickham, unmarked at the far post, volleyed a half-cleared Larsson corner wide.

Liverpool began to exert belated pressure and Sterling, set free by Gerrard, teed up Philippe Coutinho. But his low effort was saved by a previously redundant Costel Pantilimon.

Jordi Gomez had a long-range shot held by Simon Mignolet after a Sunderland break, while Sterling went down looking for a late penalty but his appeals went unheard.

Building will begin on expanding Liverpool's main stand on Monday and it appears that Rodgers also has a lot of work to do on the pitch.

A week that started so well for Poyet's charges with a creditable draw at Chelsea has ended the same way thanks to another resolute performance that leaves them two points clear of the drop zone.

Liverpool manager Brendan Rodgers: "I thought the players gave everything and in the second half. They needed a wee bit of luck and it didn't come.

"If you can't win it's important you don't lose. We've taken seven points from nine this week which is a good return for us.

"Stevie [Gerrard] coming on gave everyone a lift. I thought him and Raheem [Sterling] were outstanding."

Sunderland manager Gus Poyet: "I think there are times in life when you get opportunities. Today we lost a great opportunity to win at Anfield.

"In terms of defending and keeping a clean sheet we went back to the basics.

"We need to score more goals and be more clinical. The most important thing is to win and at the moment we cannot win too many."