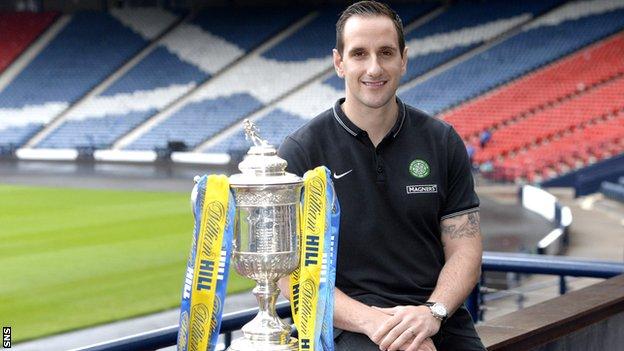 Celtic coach John Kennedy insists striker John Guidetti did not dive to win a penalty in the win over Hearts.

Celtic eased to a 4-0 triumph in the Scottish Cup at Tynecastle on Sunday, with Guidetti winning and scoring a penalty to make it 2-0.

Television replays showed Brad McKay made no contact with the Swede, but Kennedy jumped to Guidetti's defence.

"I've seen the incident once. John is not a player who dives. He does not try to cheat," said Kennedy.

And he added: "I don't think it was a dive. Nowadays you can be too critical of referees in these situations.

"It's either a stonewall penalty or it was a dive, there seems to be no middle ground.

"It looks like his momentum has tried to take the player forward, he's cut back and fell over. If you look at the pictures back, he's not jumping about claiming for a penalty.

"The referee has given it very quickly, which means in his mind it is a penalty kick. That was the end of the matter. We got the decision, we scored, we moved on."

Morgaro Gomis was sent off early on in Sunday's fourth round tie, with Celtic then cruising to victory thanks to a Virgil van Dijk double, Guidetti's penalty and an Anthony Stokes strike.

And Kennedy did not think the spot kick decision had a major impact on the match.

"The penalty wasn't mentioned after the game," he said. "We were very convincing in our victory. Even at 1-0, if we had not got that decision we would have still been very confident of going on to win the match."

Celtic now face Dundee at Dens Park in the fifth round after Monday's draw at Hampden.

The champions have drawn 1-1 and won 2-1 against Dundee in their two league meetings so far this season.

And Kennedy added: "It's going to be tough. If we have an off day, Dundee will certainly take advantage of that.

"They have come up and settled into the top league quickly. We have certainly found that from the way they have performed against us."