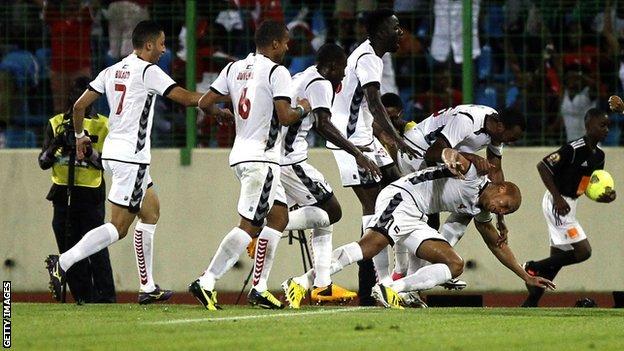 Former winners Zambia and hosts Equatorial Guinea will be among the top seeds in Wednesday's draw for the 2015 Africa Cup of Nations.

The Confederation of African Football divided the 16 teams for the 17 January to 8 February finals into four pots.

Seedings were established by the teams' performances in the last three editions of the tournament and the qualifiers over the same period.

Also taken in to account were results in 2014 World Cup qualifying.

The draw, which will determine four groups made up of one team from each pot, will be held in Malabo from 18:00 GMT and you can follow it live on this website.

Ghana and Ivory Coast are the other top-ranked sides, while 2013 runners-up Burkina Faso have been placed in the second group of teams.

It means Burkina Faso could be placed in a group with Zambia, as they were in the last edition when the sides played out a 1-1 draw in their group meeting.

Algeria, who are the top-ranked side on Fifa's global list, have also been placed in pot two, so they, too, will face one of the top seeds.

Last time out the Desert Foxes finished bottom of a group that included Ivory Coast.

But they go into next year's tournament full of confidence after finishing top of their group in qualifying, continuing their form that earned their best result at a World Cup when they reached the last-16 in Brazil in the summer.

Equatorial Guinea stepped in as hosts of the finals after Caf rejected a request from original hosts Morocco to postpone the tournament because of the country's fears over the potential spread of Ebola.

As a result, Equatorial Guinea were reinstated in the competition, despite have been eliminated in qualifying after being penalised for fielding an ineligible player.