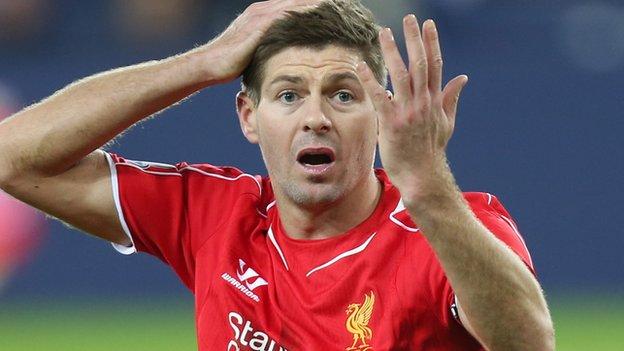 Liverpool manager Brendan Rodgers is "not sure" when Steven Gerrard will sign a new deal - but believes his captain still has more to offer.

Gerrard, 34, who has been offered a new contract, scored on his return to the starting line-up in Tuesday's 3-1 win at Leicester.

"If I can manage his training and games he can still have real impact for this team," said Rodgers.

About his contract, the midfielder told BT Sport: "I'll decide when I'm ready."

He added: "There's nothing to say on the contract at the moment. When there is, the fans have known me long enough, I'll come out and say what I need to say."

Gerrard played a key role in Liverpool's first league away win since 19 October after being left on the substitutes' bench for Saturday's 1-0 home win over Stoke.

The Reds came from behind after Simon Mignolet's own goal had been cancelled out by Adam Lallana's 50th career league strike. After Wes Morgan was sent off, Gerrard also had a hand in his side's third for Jordan Henderson.

"No matter who you are the time comes when the wheels are out and ready to land. Steven's wheels aren't out yet," said Rodgers.

"At this stage of his career it is about the level of the game and he is a very important player for us. He is not 24 any more. You have to [manage workloads) with players at this part of their career, so it is about mapping out the rest of the season for him.

"He's been a world-class talent since a young age and he still has that. OK, the legs might be different now in terms of the number of games he can play, but it's my job along with him to pitch him in at the right times."

The midfielder, whose current deal finishes at the end of this season, has been at Anfield his entire career.

Both Rodgers and Gerrard denied talk of a rift between them before the win at the Foxes.

"Here, sentiment doesn't come into it for me," said Rodgers. "I pick Steven Gerrard because I think he can influence a game for us.

"For me, irrespective of the players, it's about what is best for the team."