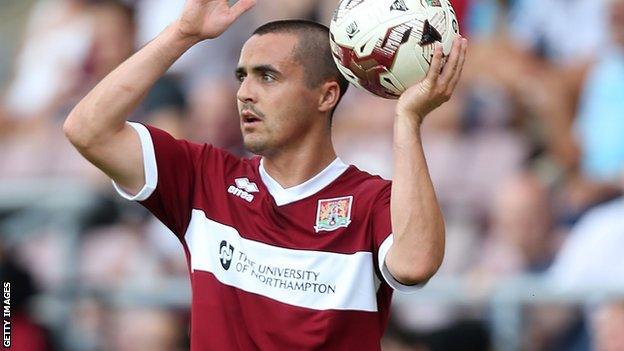 Northampton Town defender Evan Horwood has said his spell on the sidelines has been torture.

The 28-year-old has been suffering from tendinitis and recovering with Lewis Hornby, Ian Morris and Zander Diamond.

"We feel like forgotten men. It's like you're in a hamster cage every day - doing weights, winding each other up and waiting for dinner. It's torture," he told BBC Radio Northampton.

"Come Saturday we're just hovering around and feeling like a spare part."

Horwood, who had a loan spell with the Cobblers last season, signed a two-year deal in the summer after leaving Tranmere.

He has not played since August, just four games after joining the club, but came through a behind-closed-doors game in midweek - alongside Hornby.

And the former Hartlepool left-back believes promotion from League Two is still feasible for the Cobblers, despite having have won just two of their last nine league games.

"It's the only reason I signed," he said.

"I had another year left at Tranmere. But I felt like it was the best opportunity to get promotion. I've never been promoted and I want that under my belt."