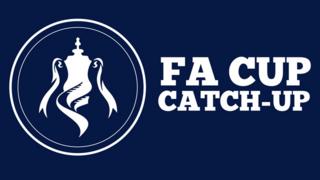 Best bits of round two in 10 minutes

Watch the best goals and the funniest moments from the FA Cup second round in under 10 minutes with our FA Cup Catch-Up.

Download to your mobile phone or tablet via BBC iPlayer.

Find out who will be drawn against a Premier League or Championship club in Monday's third-round draw, live on BBC Two from 19:00 GMT.