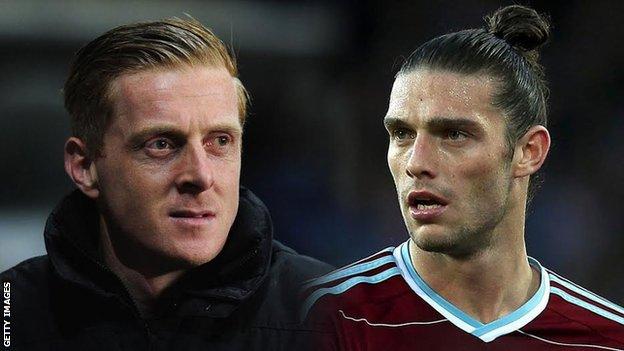 Swansea City manager Garry Monk says he is looking forward to the challenge of dealing with West Ham striker Andy Carroll on Sunday.

Carroll, 25, set up two goals when the Hammers beat the Swans in February, before being sent off for catching Chico Flores with his arm.

He also scored the winner against Swansea at Upton Park in February 2013.

"He's going to cause any defence trouble," said Monk, adding that his side have a plan to contain Carroll.

"Then you've got the balls that come off him, the flick downs, the controls he has, the people he tries to bring into the game, we need to affect them as well.

"He's a very good player, a very intelligent player, but it's a challenge for our players."

Bony has scored 22 Premier League goals since joining from Vitesse Arnhem for £12m, while Carroll has found the net just twice in 19 league appearances since his £15m move from Liverpool.

When asked about Allardyce's comments on Bony, Monk said: "Obviously they didn't really want him enough.

"He's a Swansea player and we're very grateful for that. He's obviously proven a good signing."

West Ham are fifth in the Premier League table after five wins from the last eight games, and Monk believes that success has been down to Allardyce varying the Hammers' tactics.

"They've tweaked a few things with the players they've brought in," said Monk.

"They do play a bit more football on the ground and build the play up, but they're very direct as well so they do mix it up.

"It's not a long ball if it's delivered with quality, it's a pass."

"I can imagine [West Ham] being right up there, fighting for it towards the end of the season," said Monk.

"They've got some great fans up there, who make it a very good atmosphere to play in.

"Hopefully we'll go up there and put a performance in."

Monk will be without left-back Neil Taylor, who is suspended after collecting five yellow cards, though defender Federico Fernandez has returned to training following a calf injury.