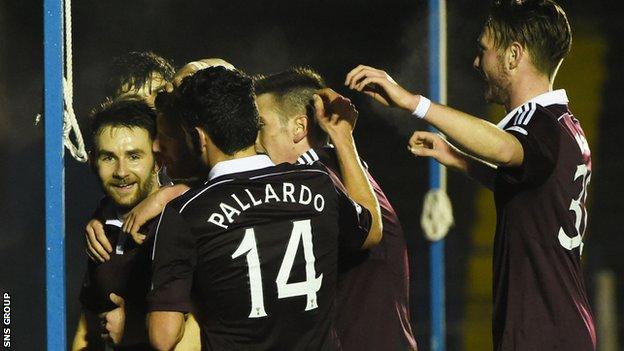 Hearts stretched their lead at the top of the Championship to 12 points with a comfortable victory at Central Park.

James Keatings fired the visitors ahead with a sharp, first-time finish from Adam Eckersley's pass on 25 minutes.

The same player hit the post from a free kick soon after as Cowdenbeath struggled to make an impact.

The Fife side improved after the break but Callum Paterson controlled with his head and chest before hammering in a powerful volley to wrap up the points.

This was Hearts' 15th win from 17 league games and their unbeaten record was never under any serious threat.

On a narrow, heavy pitch, Hearts chose to get the ball forward quickly, with Paterson pushed up front from his normal beat at right-back, alongside Keatings.

And the change of tactics paid off, with the home defence finding it difficult to contain Paterson.

Miguel Pallardo released Eckersley down the left channel and the full-back raced on to square for Keatings to slam the ball home.

Keatings then thumped the base of a post with a curling free-kick from 25 yards, while Brad McKay headed straight at Thomson from a promising position.

The hosts adopted a more direct route in the second half and spurned a good chance to equalise when Colin Marshall drove forward to slip a pass to Sean Higgins but Neil Alexander got down smartly to save the forward's low shot.

Hearts doubled their lead in spectacular fashion when Paterson got his head to a diagonal cross from Pallardo before bringing the ball down on his chest and firing a shot past Thomson.

The Edinburgh side went close to extending their lead when Prince Buaben's half-volley was deflected wide and McKay lifted a shot over following a corner.

Craig Sutherland had two opportunities to net for Cowdenbeath but lacked composure when angling a strike wide and Alexander produced an impressive stop to keep out the substitute's strong, close-range header.

Hearts defender McKay then made it a hat-trick of missed chances when heading wide from a corner and Robbie Buchanan, on for the last few minutes, let fly but could not add any further cheer for the 3,000 travelling supporters.