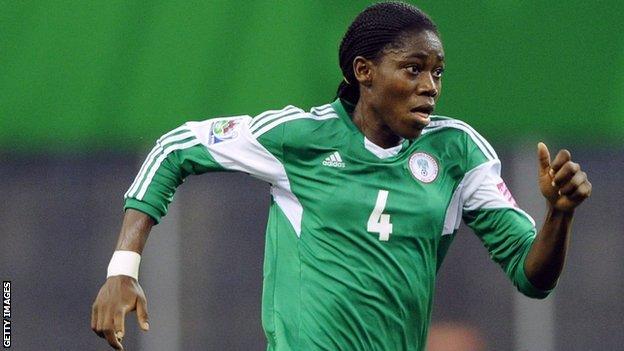 The African champions Nigeria have been drawn in the so-called 'Group of Death' at the 2015 women's World Cup in Canada.

Nigeria will face the number one ranked Olympic champions, the United States, in Group D at the showpiece event to be played from 6 June to 5 July.

The Super Falcons will also take on fifth ranked Sweden, who conceded just one goal in 10 qualifying matches.

Australia complete the toughest group of the six that were drawn on Saturday.

There is no group that is simple. Every team is good

The Group D teams will play in Winnipeg.

Nigeria coach Edwin Okon, who was at the draw in Quebec, said Nigeria were ready for the challenge.

"There is no group that is simple," Okon told BBC Sport.

"Every group is tough. Every team is good."

Okon also insisted that despite the tough draw, Nigeria can go far in Canada.

"We will set a target for ourselves. We will need to work hard to get to the level we want at this tournament."

Elsewhere, Ivory Coast will play their matches in Ottawa, having been drawn in Group B alongside Germany, Norway and Thailand.

Cameroon - the third African nation taking part - will take on Japan, Switzerland and Ecuador in Vancouver.

From the six groups, 16 of the 24 teams will advance to the knock-out stage.

There was some confusion midway through the draw as Colombia were drawn in Group E with Brazil - teams from the same confederation cannot be drawn in the same group. As a consequence, Colombia were put in Group F, with South Korea then placed in Group E.

The exception to the rule concerns Europe. Germany and France have both been drawn in a group with another European team.