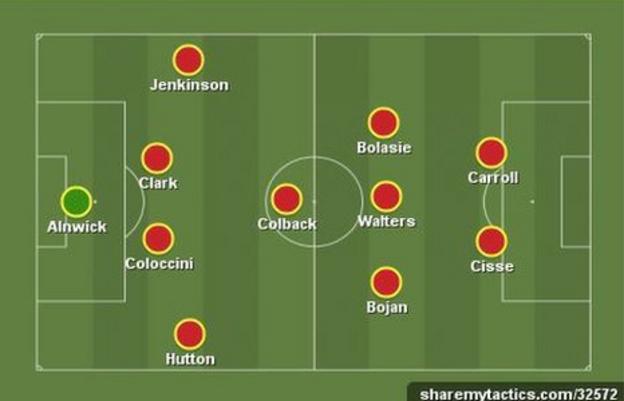 Chelsea's unbeaten start ended at Newcastle, while Manchester City moved to within three points of the summit with a win over Everton.

West Ham are up to third after victory over Swansea - their third in a row - and Arsenal remain in sixth spot following another defeat at Stoke.

Further down, QPR are out of the relegation zone after defeating fellow strugglers Burnley, while Leicester remain bottom after losing at Aston Villa.

Rob Green, Joe Hart, Hugo Lloris and Allan McGregor all had great games for their respective clubs but I've gone for Newcastle's young keeper Jak Alnwick. He's only 21 and came on for his league debut in difficult circumstances against Chelsea, but that didn't seem to faze him one bit.

He flattened Diego Costa with his first clearance from a corner and then denied the same player a certain goal with a tremendous save as Jose Mourinho's side were defeated 2-1. I'm not entirely sure what plans Magpies boss Alan Pardew has in mind for this goalkeeper, but if he's shrewd he must start giving this lad some games in order to improve his development and keep him interested. Otherwise he might lose him.

The 22-year-old's cross for Andy Carroll to equalise was a key moment in the 3-1 home win over Swansea. What impressed me most about the on-loan Arsenal defender was the way he handled the very dangerous Jefferson Montero, who he kept quiet for most of the game. Compare that with the performance of Arsenal's Calum Chambers, who was destroyed by the Ecuadorian at the Liberty Stadium. I think Gunners manager Arsene Wenger should seriously consider bringing Jenkinson back. He needs defenders who are prepared to compete.

It's been a long time since I've seen a team so well prepared and drilled for a match as Newcastle were against Chelsea on Saturday. Magpies boss Alan Pardew and his coaching staff must take credit for that. However on the pitch you need a general and in Fabricio Coloccini he couldn't have picked a better man.

The unflappable Argentine kept his men calm and resolute against the league leaders throughout some pretty heavy bombardment. Even after Newcastle had been reduced to 10 men, Coloccini kept his troops on track as Chelsea fell to a 2-1 defeat.

In the absence of Ron Vlaar and Nathan Baker, Ciaran Clark certainly stepped up as Aston Villa came from behind to defeat Leicester City 2-1. His goal was well taken but it was his tackle on Leonardo Ulloa that told you all you needed to know about the way this Villa defender approached the game. Paul Lambert has waited a long time for Clark to come of age. It looks like he's getting there.

It was a tremendous battle between Aston Villa's Alan Hutton and Leicester City's Jeffrey Schlupp, with neither player giving an inch. In the end it was Hutton who won the day and the points as Paul Lambert's team triumphed 2-1. That said, I can't for the life of me understand why referee Craig Pawson had to send off Paul Konchesky when he and Hutton had what was little more than a heated debate. Referees must take into consideration that no one cares what players say to each other. It's the two-footed tackles that hurt.

Newcastle's 25-year-old midfielder forced the first real save in the 2-1 win against Premier League leaders Chelsea, made a superb tackle on Eden Hazard and then provided the through ball that led to the winning goal. An outstanding performance.

Stoke manager Mark Hughes singled Bojan out for special praise against Liverpool last week, and the 24-year-old former Barcelona player destroyed an Arsenal side high on individual talent and low on steel. The Gunners won one tackle as they went down 3-2 at the Britannia Stadium. Bojan finished a lovely move in the first half with a side foot volley, it was unbelievable. And he had a perfectly good goal ruled offside. This lad can play.

Jon Walters scored the penalty that earned Stoke all the points in the corresponding fixture against Arsenal last season. And it was the 31-year-old's display that caused the Gunners nightmares throughout Stoke's 3-2 win at the Britannia Stadium this time. His ball into the box for Bojan to score was sensational, before he scored himself.

Crystal Palace's Yannick Bolasie is providing some wonderful moments this season. He skipped around Christian Eriksen and Roberto Soldado in the goalless draw at Tottenham as though they were not there to set up Joe Ledley, who should have scored. If Bolasie and his team-mate Wilfried Zaha can turn their party pieces into goals, you can be sure Crystal Palace will not only survive the season, but take the Eagles into the top half of the table.

It's happened before and now it's happened again... Papiss Cisse scoring two goals against Chelsea. The Senegal striker hasn't been prolific for Newcastle recently but on his day he can be lethal as Chelsea found out during the Toon's 2-1 win over the Premier League leaders. Those two goals might be the spark the forward needs to recapture that old killer instinct and catapult Newcastle back into Europe.

I find myself constantly checking the Premier League table to make sure I'm not seeing things. West Ham are third in the table and in a Champions League position? It's fifteen years since the Hammers did anything like this and if they can keep Andy Carroll fit then who knows what they can achieve. The former Liverpool player wreaked havoc in the 3-1 win over Swansea, whose defence tried everything they could to restrain him but failed. His two goals were a testimony to his aerial power in the opposition's box.