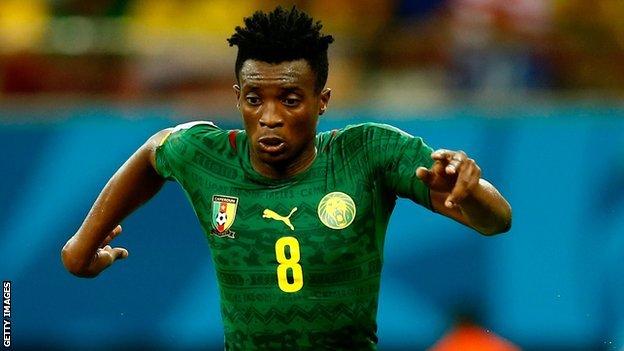 Cameroon forward Benjamin Moukandjo believes the Indomitable Lions can mount a strong challenge at the 2015 Africa Cup of Nations.

They were unbeaten in qualifying for the tournament in Equatorial Guinea.

And Moukandjo says the team has learnt lessons from their disastrous World Cup in Brazil where they lost all three games and fought among themselves.

"The World Cup is buried and completely in the past, the team showed that in qualification," he told BBC Sport.

"We picked valuable lessons in Brazil that will help push our national team positively in future tournaments."

There were many lows for Cameroon in Brazil; they conceded nine goals and scored only one, midfielder Alex Song was sent off for violent conduct and Moukandjo was head-butted by team-mate Benoit Assou-Ekotto.

But they went some way to erase their unwanted memories of that campaign by qualifying in style for next year's African showpiece, in the process ending a run of two successive failures to reach the continental event.

They are now regarded as one of the favourites to lift the crown for what would be their fifth time but they have been given a tough draw in a group that contains Ivory Coast, Guinea and Mali.

"We have been pitched in a very tough group. We face Ivory Coast again after playing them in the qualifiers," said Moukandjo, who plays in the French League with Reims.

"Mali is a good team and Guinea are, too. It's the second toughest group in the competition. But we have good qualities to come out of this group.

"When you play a tournament like this it comes with huge pressure and the important thing for us is to turn this pressure into a positive pressure.

"Cameroon is a big country with big ambition to go far in the tournament and our fans are expectant.

"It is true we did not qualify for the 2012 and 2013 tournaments so we travel to the tournament with ambition. We have enough time to prepare."

If they are to return to winning ways, they must do so without retired captain Samuel Eto'o and Song, who appears to be paying the price for his misdemeanours in Brazil.

"We cannot be arrogant, unrealistic or disrespectful, so first we target the quarter-final then take it step by step," added Moukandjo.

"We do have a very good team but no superstars. We play together as a team which is our biggest strength.

"If we continue with this spirit and do what the manager expects, we can do something big for our country."