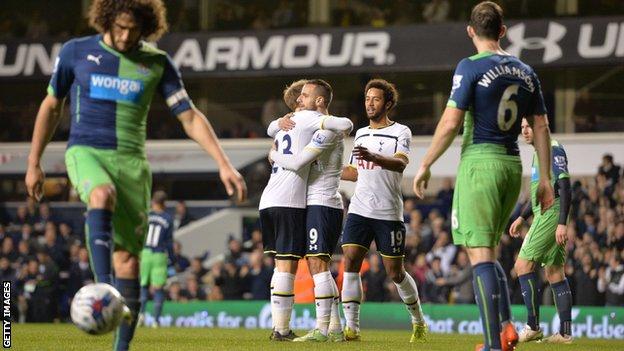 Spurs will in the last four.

Their supremacy left the home fans at a noisy White Hart Lane singing confidently about the prospect of making the short trip across north London to Wembley for the final on 1 March.

And being drawn against the Blades in next month's two-legged semi-final will increase their expectations of Spurs reaching a first final for six years.

Spurs boss Mauricio Pochettino has changed his team regularly this season as he juggles domestic ambitions with the demands of the Europa League.

The Argentine claimed in the pre-match build-up that any side he picks is not "weakened" - and this time his players proved him right.

One point separates Tottenham and Newcastle in the top half of the Premier League, and only Alnwick's mistake - on his third senior appearance - separated the sides at half-time.

The 21-year-old failed to gather Christian Eriksen's left-wing corner, allowing home midfielder Bentaleb to swoop in with an outstretched leg at the far post for his first Spurs goal.

Visiting boss Alan Pardew surprised many by naming an inexperienced side at Manchester City in the last round, but it was a tactic which paid dividends as Newcastle shocked the Premier League champions with an energetic performance.

He named another unfamiliar line-up at White Hart Lane, to non-Magpies supporters at least, due to injuries and suspensions rather than choice.

The visitors lacked the nous and punch to take the chances created against Tottenham - and they were heavily punished.

Newcastle scored 10 seconds after the restart in October's Premier League meeting between the sides at White Hart Lane, but on this occasion it was the visitors who started the second half slowly.

Belgium midfielder Chadli was allowed the space to run at a cowering Newcastle defence and strike into the bottom-right corner.

And when Kane, who, Pochettino says will be selected for the England senior squad in "a matter of time", netted his 12th goal of the season, there was little prospect of a Newcastle comeback.

Soldado took advantage of a loose Alnwick save just 73 seconds after replacing Kane for only his fourth goal of a frustrating campaign.

Then it was a case of damage limitation for the visitors, who go into Sunday's Tyne-Wear derby against Sunderland on the back of a heavy loss.

"It was a fantastic night, a very good performance from the team.

"I am very happy because tonight was the first time that there was the relation between the team and supporters.

"It was brilliant at White Hart Lane and I enjoyed it a lot tonight."

"If ever the cliché of goals changing games was relevant, this was it.

"I thought the game was pretty even. Jak Alnwick makes a mistake on the cross and you can get away with that sometimes, if the defender clears it or the striker hits it over the bar.

"But it goes in and that kind of summed up our night. We had some chances, big chances that we didn't take."