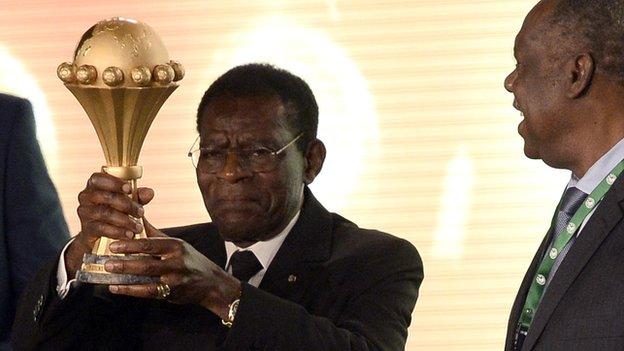 Builders in Mongomo are working around the clock to finish one of the four stadiums which are due to host the 2015 Africa Cup of Nations in just over a month.

Mongomo, the hometown of Equatorial Guinea's President Teodoro Obiang (pictured), along with Ebebeyin, Bata and Malabo are set to host the finals.

The tournament is set to kick off on January 17 in Bata with the first match in Mongomo planned for two days later as Ghana play Senegal.

Equatorial Guinea agreed to organise the tournament last month at the request of the Confederation of African Football (Caf).

Caf took the finals away from Morocco, who had demanded a delay due to their fears over Ebola.

The stadiums in Malabo and Bata were both used as venues when Equatorial Guinea co-hosted the 2012 Nations Cup with Gabon.

However work needs to be done on the grounds in both Ebebeyin and Mongomo.

"The turf for Mongomo and Ebebeyin stadiums is going to be brought by plane from Europe," one of the supervisors told the BBC.

Work also needs to be done on the stadium structure and other facilities, but all those involved in the preparations are confident the work will be completed in time.

"Time is a big challenge but the good thing is that it's not new for us to work against time," said Francisca Obiang Jimenez, the president of the Office of National Projects, who was there supervising the works.

"We have built almost an entire city, Sipopo, in about two years and we've also built a highway.

"Everybody was expecting that that would finish four years from now but we finished it on time, so I don't think there will be much problem with the stadiums."

The new highway means you can travel from Bata, on the coast, to Mongomo, located near the eastern border with Gabon, in around two hours.

While the stadiums look set to be ready in time, having enough accommodation could be a challenge for the organisers in both Mongomo and Ebebeyin.

Ebebeyin has only one large hotel of international standards.

"We have hotels and we have also some social houses that we've finished building and have not given to anybody yet," Ms Obiang Jimenez told us.

"So we are furnishing them in case we find ourselves with not enough rooms but, according to what the Caf said, we have more than enough."

The government and organisers are also taking measures against the possibility of the deadly Ebola virus getting into the country.

All passengers arriving at Malabo airport from abroad are having their temperature checked.

There was also an Ebola screening exercise at Bata stadium, before a match of the CEMAC (Economic Community of Central African States) Cup, which is currently being staged in Equatorial Guinea.

"During the Cup of Nations, there will be other controls and this kind of protection will be happening further away from the stadium," a local fan, Juan Esono, told us.

A Cameroonian working at the Mongomo stadium told BBC Sport: "I've been checked many times for Ebola when crossing the border near Ebebeyin. So I don't think there will be a problem with the virus here."