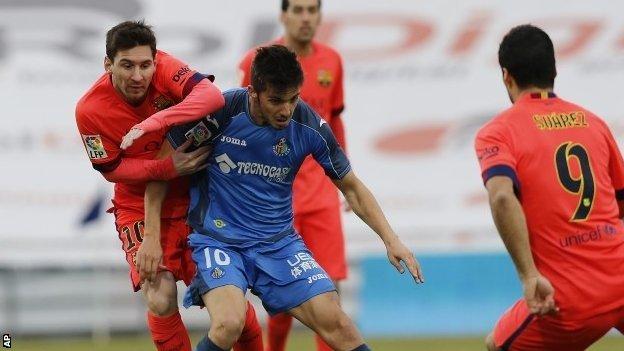 Lionel Messi hit the woodwork as Barcelona wasted a host of chances in a goalless draw at mid-table Getafe.

The result means they will not go into the short winter break as league leaders, as they trail Real Madrid by four points and have one game left.

Messi failed to add to his record 256 La Liga goals but went closest, hitting the crossbar with a free-kick early in the second half.

The visitors, in characteristic fashion, dominated but were wasteful in front of goal with only two of their 23 efforts on target, despite Messi and Luis Suarez playing the 90 minutes.

Midfielder Xavi said: "There is a long way to go still but it's a step backwards.

"It was the kind of game we usually cope with but if we don't break the deadlock things get tricky. We have a lot of good goalscorers up front but today the ball didn't want to go in."