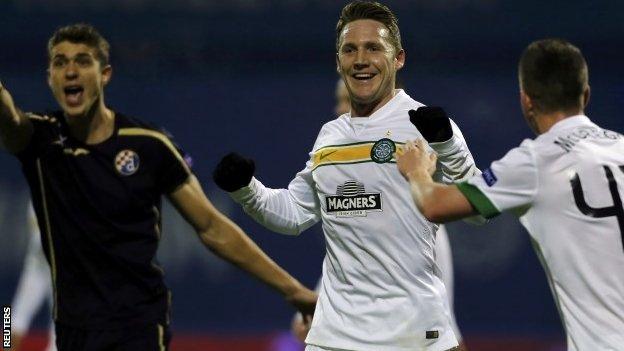 Celtic have been drawn against Inter Milan in the last 32 of the Europa League, with Liverpool facing Turkish side Besiktas.

Tottenham play Serie A side Fiorentina, Everton face Swiss club Young Boys, while holders Sevilla are up against Borussia Monchengladbach.

This season's Europa League winners will qualify for next year's Champions League play-offs.

Celtic's tie against Inter Milan is a repeat of the 1967 European Cup final in Lisbon, which the Glasgow side won 2-1 to become Britain's first European champions.

Inter, who appointed former Manchester City boss Roberto Mancini as their manager for a second time in November, are 12th in Italy's top flight.

Tottenham could come up against England defender Micah Richards, who is on loan at Fiorentina from City. It is a first meeting between the London and Florence clubs.

Liverpool, who entered the Europa League after finishing third in their Champions League group behind Real Madrid and Basle, last played Besiktas in the 2007/8 season, winning 8-0 at Anfield.

Besiktas board member Ahmet Nur Cebi said: "Liverpool should be more concerned about us than we are about them.

"We will knock Liverpool out of the competition. There is an account which wasn't settled in England from previous years. Yes, I mean that 8-0 defeat. We'll settle the account now."