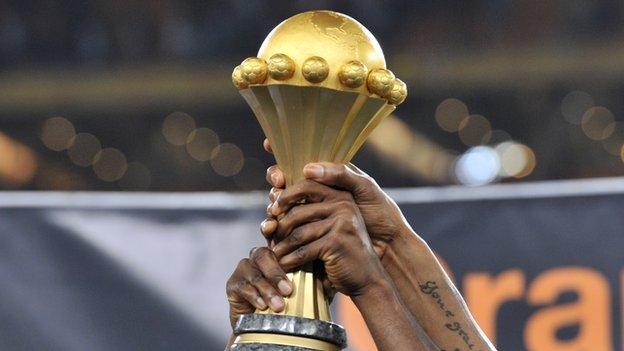 Ivory Coast and Mali will face Nigeria in warm-up games ahead of January's Africa Cup of Nations.

The Ivorians will play Nigeria, who did not qualify for the finals in Equatorial Guinea, in Abu Dhabi on 9 January.

Mali, who finished third at the 2012 and 2013 Nations Cups, face Nigeria four days later in the same city.

Nigeria beat both Ivory Coast and Mali on their way to winning the African title last year in South Africa.

Ivory Coast and Mali will play each other at the finals on 24 January - Guinea and Cameroon are the other two teams in in Group D.

The Nigeria Football Federation (NFF) has confirmed that assistant coach Daniel Amokachi will lead a team of locally-based players in the UAE for the two games.

"We are working round the clock to make sure that the Super Eagles will have opponents for all the Fifa windows available in 2015," NFF general-secretary Musa Amadu was quoted as saying in an NFF statement.

"We are happy that the two games with the Ivorians and the Malians are sealed.

"The Elephants and the Eagles are on their way to the 30th Africa Cup of Nations in Equatorial Guinea, so they are sure to give our team good games."

Enyimba's Mfon Udoh, top scorer in the 2014 Nigerian Premier League with 23 goals, is the 24-man squad's headline act for the two friendly games.