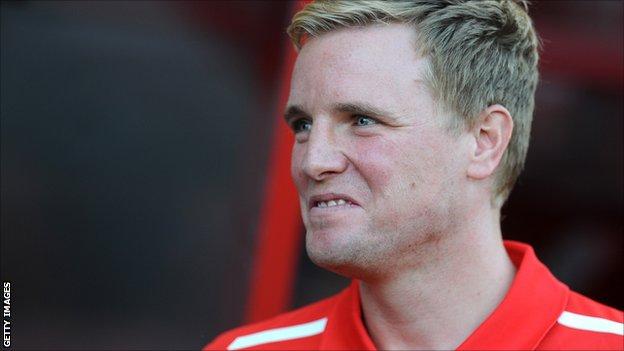 Bournemouth manager Eddie Howe says their League Cup defeat by Liverpool on Wednesday should not be seen as a setback for the Championship club.

The Cherries lost 3-1 to their Premier League opponents in their first quarter-final in the competition.

Howe believes it has been a great learning curve for his squad, who have now faced Liverpool twice in a year.

"I think it can make us more hardened to the atmosphere in these games," Howe told BBC Radio Solent.

Bournemouth currently top the Championship and 37-year-old Howe expects the experience of playing at a sold-out Dean Court to help his side with their battle to win promotion,

"You'd like to think they'd (big games) be here on a more regular basis," he said.

"That's not saying we will get promoted, but it's just the big game atmosphere and making sure we respond to the challenge, and I thought it was another positive step towards doing that,"

Howe admitted to being bemused at the nature of Liverpool's second goal, but refused to blame captain Tommy Elphick, who mistook a whistle from the crowd for referee Mark Clattenburg's and stopped as Philippe Coutinho went to shoot.

The ball fell to Lazar Markovic, who doubled Liverpool's lead, and in the midst of their celebrations Elphick was seen pointing at his ears to explain the error.

"I don't know what to say on that, I have never really seen that before," Howe said.

"I heard the whistle myself from the stand. It's a bizarre one and Tommy has obviously genuinely believed it to be the referee's, but there you go. I'm sure the person who has done it wouldn't have meant it to have cost us a goal."

The defeat ended a 12-match unbeaten run, but the Cherries travel to Blackpool on Saturday and Howe said the loss should not affect their confidence.

"It's a game that we've hopefully learned from and hopefully you want to take the positive aspects out of it and continue look forward and upwards," he added.