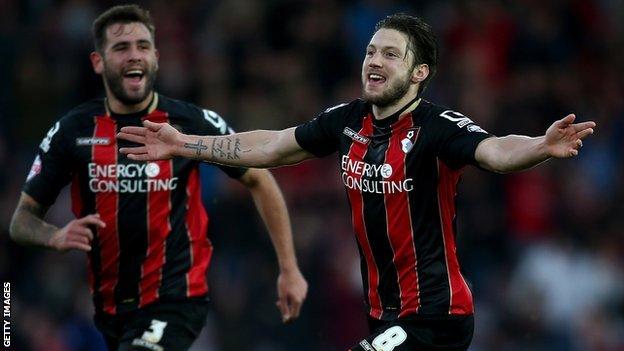 Pitman then had a penalty saved by keeper Marcus Bettinelli after Jack Grimmer fouled Callum Wilson.

While Eddie Howe's side never threatened to repeat their 6-1 demolition of Blackpool, the win was sufficient to reclaim the top spot they vacated briefly when Ipswich beat Brentford in the early kick-off.

Ritchie's delivery from an early corner was inch-perfect for Pitman, who stole in at the near post to deftly head past Bettinelli.

Despite driving rain and bitter cold, both sides remained committed to the passing game. But while Bournemouth kept Bettinelli busy, the visitors' neat build-up play rarely translated into clear chances.

Fofana then curled a shot wide, while McCormack set up captain Parker, whose low drive was pushed wide for a corner.

As time ran out, Bournemouth looked more likely to score, as the lively Ritchie fed Marc Pugh, who was foiled by Bettinelli.

And after Cottagers substitute George Williams was booked for diving, Arter sealed proceedings from the edge of the area with a shot which his brother-in-law Parker narrowly failed to charge down.

Bournemouth boss Eddie Howe: "The challenge for us now going forward is to stay at the top of the table. Everyone wants to knock us off.

"We are a scalp now. We faced that situation in the past couple of weeks now. We're a lot more well known now, so the element of surprise has gone.

"But we were always going to have to cross that bridge and the players are going to come under more pressure now in different ways."

Fulham manager Kit Symons: "We said at half-time we'd weathered the storm a little bit. We had some opportunities, but it wasn't quite to be.

"We rode our luck at times, but we had to be brave and take the game to Bournemouth and I thought we did that in the second period."