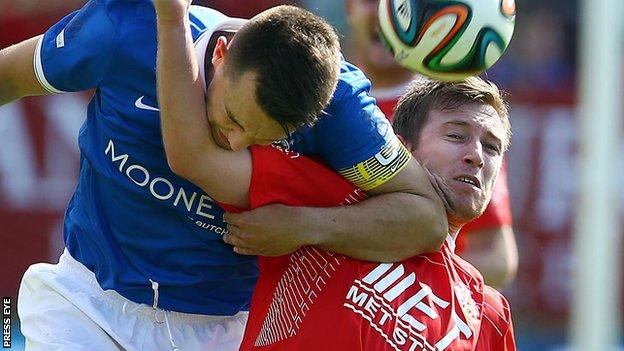 New Premiership leaders Linfield face Portadown, the team they knocked off the top, in Saturday's match of the day at Windsor Park.

Linfield have won six and drawn the other in a seven-game league sequence which has taken them one point ahead of champions Cliftonville and Portadown.

"The boys have been gaining in confidence and self-belief in recent weeks," said manager Warren Feeney.

"It is nice to be up there and the target is to keep the momentum going."

Former Linfield stars Michael Gault, Robert Garrett and Mark McAllister will be playing at Windsor for the first time since their summer moves to Shamrock Park.

Portadown will be anxious to get something from the tough fixture after a shock defeat by bottom club Warrenpoint last weekend.

Boss Ronnie McFall labelled that Miltown showing as an absolute disgrace and it was a jolt to the Ports, coming after a six-game winning run.

Cliftonville, who qualified for the League Cup final by beating Bangor 4-3 on Tuesday night, take on Glentoran in an all-Belfast clash at the Oval.

"Our record there is not that good, I am told it is three years since we beat the Glens away from home," said Tommy Breslin who is hoping to take the north Belfast side to a third title in a row.

"Glentoran have been going well and are winning matches regularly.

"But then they lose one or two and we hope to catch them on an off day because we need to keep up with Linfield and Portadown at the top of the table."

Coleraine who have moved into the top six after wins over Cliftonville and Glenavon, host Warrenpoint at the Showgrounds.

"Our form has been good, even in the game we did not win. We are creating chances," said Bannsiders boss Oran Kearney.

"I am delighted with the progress this squad has made. I could not ask for anything more.

"Warrenpoint had a fantastic win against Portadown and they always cause us problems. They are a tough side."

Glenavon will attempt to halt their recent slump when they visit Ballinamallard.

Gary Hamilton's men have taken just one point from their last five league matches and have slipped out of the top six.

Ballinamallard will want to shake off the disappointment of losing to Ballymena in Tuesday's League Cup semi-finals.

Institute and Ballymena, both struggling for Premiership points, go head-to-head at Drumahoe.