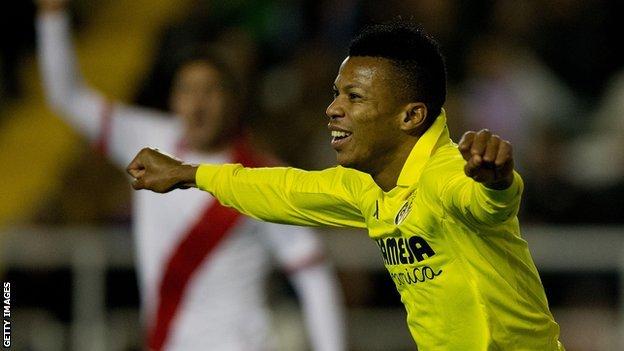 Striker Ikechukwu Uche is delighted to have signed a two-year contract extension at Villarreal that will keep him at the Spanish club until 2017.

The 30-year-old Nigeria international joined the club in August 2011.

"I am very happy to have signed an extension to my contract with the club," Uche told BBC Sport.

"I'm enjoying my professional career here and the challenge that comes with representing an ambitious club like Villarreal."

He added: "I'd like to thank the fans for being there always, fellow players and club for their continued support.

"I believe the success the club aspires to achieve is not too far away and I want to be a part of it."

He was immediately loaned out to then Spanish La Liga newboys Granada, for the whole of the season.

But he returned to relegated Villarreal for 2012-13 and emerged as top scorer with 14 goals to lead the team back to the top flight.

In 2013-14, Uche scored another 14 goals as the club finished in sixth place to secure a Europa League spot.

This season he has scored four goals in the league and one in the Europa League.

Uche has scored 101 goals in 12 years in Spanish football.

He is widely regarded as one of Nigeria's most reliable strikers at international level and is one of his nation's all-time top scorers, with 19 goals in 47 appearances, behind Rashidi Yekini, Segun Odegbami and Yakubu Aiyegbeni.