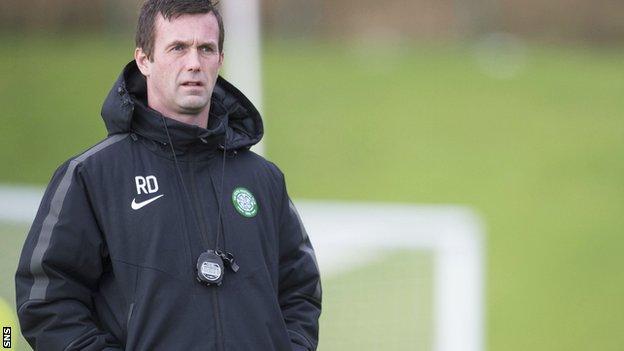 Ronny Deila says Celtic will not take the Aleksandar Tonev case any further.

It was suggested Celtic might take the case to the Court of Arbitration for Sport if Tonev's appeal failed, but Deila revealed that will not happen.

"I don't think there is any possibility to go further so it will stop here," the Celtic manager said.

And he added: "I'm very disappointed. He sent his statement out, we believe him and that's how it is. There's nothing we can do other than just go on.

"We have to take the penalty but we still believe it is not right, we believe Aleksandar Tonev. Of course he has a future [at Celtic].

"It's tough that he has seven games out but that's football. The most important thing is we stay behind him and support him, and that's what we're going to do. We will give him some days off so he can go home to Bulgaria for Christmas and then when he comes back he can fight for his place in the team again.

"It's not difficult to manage. You can't judge a person when it's word against word, in my opinion, you will never do that in a real court, so it's not proof and we still believe him."

"He [Tonev] has been fine, we all stick by him and know what happened," said Brown. "His training has been excellent, he's enjoying it and has good banter with the lads."

Celtic visit Dundee United in Scottish Premiership action on Sunday, having produced one of their best displays of the season in beating Jackie McNamara's side 6-1 at Celtic Park in August.

But Deila is preparing for test at Tannadice this weekend.

"They have improved and have had a very good season so far," said the Norwegian.

"I like the way they play, they defend hard with a good team spirit, they are very direct in their play, they are very good in counter-attacks and also score a lot in set plays. They are a good team and bring on a lot of young players. They have sold players for good money as well and still keep the team up, and that is a sign of a real culture and a good club.

"It's going to be a tough game but that's what we need."