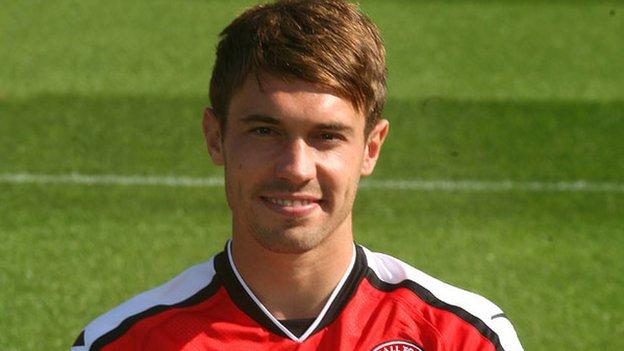 The visitors were ahead inside four minutes courtesy of a Darren Potter own goal after Andy Taylor's free-kick took a touch off the MK Dons midfielder.

A second defensive error, this time a weak back header from Potter, allowed Bradshaw in to double Walsall's lead.

Saddlers top scorer Bradshaw then followed up a rebound to add a late third goal - his 14th of the season.

MK Dons, who had not lost since their 3-2 defeat at league leaders Bristol City on 27 September, slip to fourth in the League One table.

Walsall, beaten 4-1 at home by Swindon Town on Boxing Day, climb back up to 12th, within three points of the play-off places.

"I'm disappointed like anybody, as both a fan and a manager. We weren't at the races and weren't at our fluent best. I didn't see that zip or spark we've had in the last 12 games. But we'll come back stronger.

"In 13 games, to have one defeat, the players have been magnificent. I'm not going to criticise them because they've played badly once in 13. I'm just as proud of them today as I have been the last 12.

"And, when you look at the first two goals, it was a wicked deflection off Darren Potter and an individual error by him which he's owned up for, so when you look at margins in a football match there wasn't a lot between us."