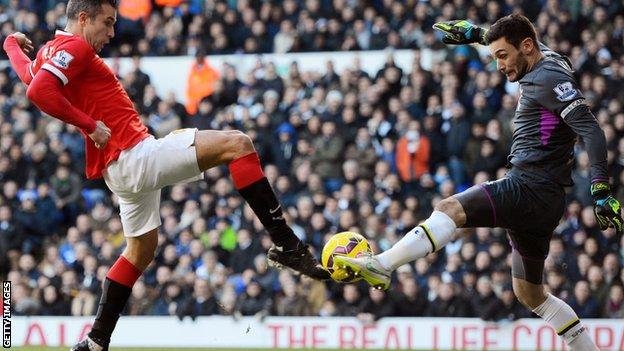 Manchester United's pursuit of Chelsea and Manchester City in the Premier League title race was hampered by a frustrating draw at Tottenham.

Mauricio Pochettino's team have scored late winners against Swansea and Leicester recently but, despite enjoying almost 65% of possession in the final 15 minutes, could not create any last-gasp drama against third-placed United.

United boss Louis van Gaal grimaced as he disappeared down the White Hart Lane tunnel, probably wondering how his side did not close the gap on leaders Chelsea and second-placed City, who both also dropped points on Sunday.

The Dutchman has been critical of the Premier League's busy Christmas schedule, but decided to name an unchanged XI from the 3-1 home win against Newcastle less than 48 hours earlier.

It was the first time in 85 Premier League games - since November 2012 - that the Red Devils named an unchanged line-up.

Despite the short turnaround, his players looked full of energy as they dominated the first half, moving the ball quickly - and with purpose - as they picked holes in the Spurs defence.

Mata's free-kick clipped the home wall and deflected on to Lloris's left-hand post before only Vlad Chiriches's desperate lunge prevented Falcao scrambling in the rebound.

Seconds later, Phil Jones thought his close-range header had crossed the Spurs line before Jan Vertonghen's acrobatic clearance, and although the United defender was proved right by goal-line technology, he was denied by an offside flag.

While the possession and territorial statistics were evenly matched, United continued to create the goalscoring opportunities.

Falcao shot tamely at Lloris, Van Persie could not convert when clean through and the France keeper brilliantly tipped away Young's curling shot.

But United appeared to tire after the break, failing to have a shot on target, as Spurs improved.

Knowing they would move into the top four with their fourth straight win, Spurs pressed higher up the pitch as the visitors were not allowed the time or space that they enjoyed in the first half.

Pochettino's men have struggled to score at White Hart Lane - netting just seven times in their last nine Premier League home games - and felt they could have been awarded a penalty when Harry Kane tumbled under Wayne Rooney's challenge.

But Spurs rarely troubled United keeper David De Gea as they continue to search for their first home league win against United since May 2001.

"I think it's a fair result. Today our performance was good - it was a great effort from the players. It was a difficult first half against a Manchester United team with great players, but we believed and showed we were solid. We are improving with every game.

"Lloris is one of the best goalkeepers in the world. It's not new for me. We know the quality from Hugo.