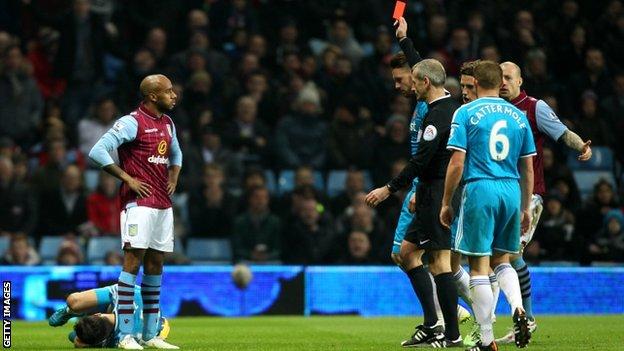 Aston Villa held on to secure a 0-0 draw against Sunderland despite playing the majority of the second half with 10 men following Fabian Delph's dismissal.

Neither team shone in a turgid first half, with a Charles N'Zogbia strike the only shot on target.

Delph was sent off for a late lunge on Jordi Gomez and the match sparked into life following his red card.

A Ron Vlaar header tested Sunderland's Costel Pantilimon, while Gomez struck the post late on for the Black Cats.

Gomez's long-range effort in the dying minutes was the closest Sunderland came to breaking the deadlock, with the visitors failing to make the most of their superiority in numbers.

The Black Cats extended their unbeaten away record to five games and will be satisfied with a fourth successive clean sheet away from home.

But they will surely rue not finding a breakthrough against 10 men, especially given Manchester City, Liverpool and Tottenham are their next three league opponents.

For Villa, the lowest scorers in the league, it was again a familiar tale of promise without any punch, but they did hold firm when Delph became the third Villa player to be sent off this month.

Prior to the match, Black Cats boss Gus Poyet described the Christmas schedule of two games in three days as a "disgrace" and the majority of this game was a fine advert for those who share Poyet's contempt of the clustered festive fixture list.

It was perhaps no surprise that two inconsistent sides in the bottom half of the table, both attempting to recover from Boxing Day defeats, failed to sparkle until a sending off.

Delph received his red card for a 49th-minute lunge that caught Gomez on the ankle, but Martin Atkinson's punishment still came as a surprise.

Sunderland did not grab the initiative immediately but gradually monopolised possession and rocked Villa for a brief period.

A fine last-gasp tackle from Vlaar prevented the increasingly-threatening Connor Wickham from racing through on goal, while desperate defending on the line by Jores Okore kept out the striker's backheel moments later.

Ten-man Villa were not without their chances though and the introduction of Jack Grealish gave them invention in the final third.

The teenager went close with a curling effort and it was from his corner that Vlaar tested Pantilimon with a powerful header.

The match ended with Gomez going close while at the other end Leandro Bacuna forced Pantilimon into an reflex save and the otherwise quiet Christian Benteke headed into the side-netting from close range.

Aston Villa manager Paul Lambert: "I'm satisfied with a point under the circumstances. It's hard enough playing with 10 men any time but with two games in two days the lads were running on empty.

"All credit to the lads, we could have won it and had chances at the end."

Sunderland boss Gus Poyet: "We draw too many games. We lost a good opportunity to take the three points, especially after the sending off. It was a great opportunity to win it.

"We tried too hard, we went a little crazy, we lost the shape and we didn't do the right things - but we tried."