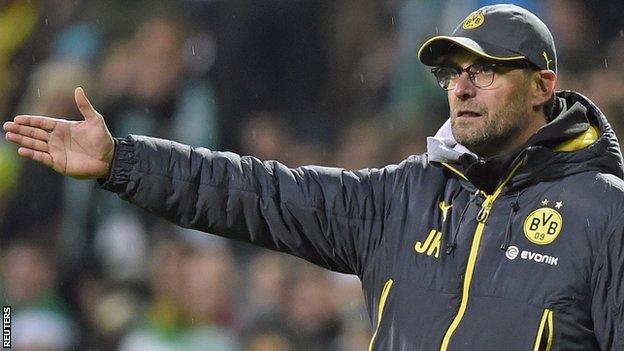 Borussia Dortmund boss Jurgen Klopp says his team look like "idiots" because of their struggles this season.

Dortmund were Bundesliga runners-up last season but are second from bottom going into Germany's winter break.

"That we stand here like complete idiots serves us right," said Klopp after a 2-1 defeat by Werder Bremen.

"We now have three weeks of preparations ahead of us which we will use intensively to come back a different team and hit back."

Dortmund's league form has been in contrast to their Champions League exploits which saw them finish top of their group and drawn against Italian champions Juventus in the last 16.

The defeat by Werder Bremen was Dortmund's 10th of the Bundesliga campaign and left them in the relegation zone.

"Any criticism that will be unloaded on us now is completely justified," added Klopp.

"It was a reflection of our season so far. We did not do it well in the first half. The good news is that the year is over."