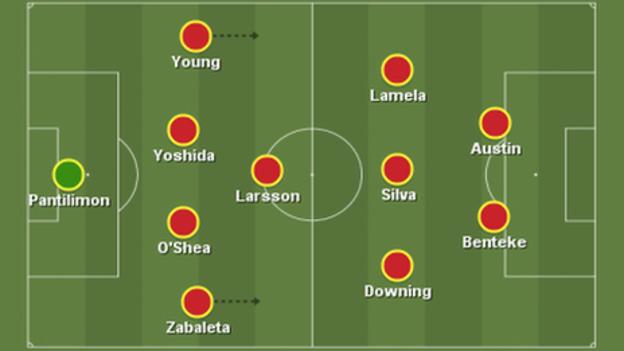 Manchester City moved level with Chelsea at the top of the Premier League at the weekend, asking questions of Jose Mourinho's side who travel to Stoke on Monday.

In the chasing pack West Ham disposed of Leicester - who have major problems - and are Tottenham beginning to find consistency under Mauricio Pochettino?

The North East derby ended dramatically, Liverpool's draw with Arsenal likewise, but who stood out? Who really made the difference this weekend?

Looking back on all the action, take a look at my team of the week and see if you agree with my choices.

He produced a world class save from Moussa Sissoko and from the ensuing corner Sunderland immediately broke away and scored to beat their rivals.

Costel Pantilimon made a similar fingertip save that was destined for the top corner earlier in the match and somehow the Romanian got his hands to the late strike and kept the Black Cats in this pulsating North East derby. An outstanding performance by the big man and the catalyst for a famous win for Gus Poyet.

Based on the run Southampton have been having I didn't see this result coming.

That said Southampton had some distinguished performers against an ordinary Everton side notably Maya Yoshida who hitherto had been off my radar. I was not only impressed by the way he dealt with the likes of Romelu Lukaku, Steven Naismith and Samuel Eto'o, but the danger he posed in the opposition's penalty area was particularly impressive.

I thought his header for the Saints' third goal was brave and determined and I shall keep my eye on this lad in future.

He made David Silva's opening goal, was involved in his second and could have scored a hat-trick himself in open play such was the infectious nature of the Argentine's performance. Pablo Zabaleta's movement throughout this fixture was superb and a constant threat to Crystal Palace.

It was a solid performance from the Sunderland skipper at the heart of their defence and it needed to be in the intense atmosphere of this North East derby. The longer the game went on the more it looked like Newcastle were likely to score and but for the calming influence of John O'Shea it might have been a very different result.

It was proving to be a very interesting contest between Manchester United's Ashley Young and Aston Villa's Gabriel Agbonlahor before referee Lee Mason got it terribly wrong and decided to send the Villa striker off.

Nevertheless Young didn't allow the clash nor subsequent dismissal of his former team-mate to impact his performance on his return to Villa Park.

The winger turned full-back has come to the rescue for United manager Louis van Gaal during an injury crisis at Old Trafford and played really well in this rather unfamiliar role. I think Young may have extended his career at Old Trafford by a couple of years at least.

For a player who isn't very quick and doesn't score many goals Sebastian Larsson has a tremendous influence on games.

Against Newcastle United he was Sunderland's inspirational leader at the heart of everything that was good and effective about their performance. It just goes to show that you don't have to be quick or a prolific goal scorer to make it in the Premier League, just hard working and intelligent.

He threatened to score from the right hand side of the pitch earlier in the game and Burnley didn't heed the warning signs. When he tried it a second time the Clarets paid the price as the ball flew past Tom Heaton in the Burnley goal.

Not a bad way to open your Premier League account but frankly a player with Erik Lamela's talent should be scoring more goals than the occasional one or two.

Stewart Downing is playing the best football I think I've seen him play. I can't work out whether it's totally down to West Ham manager Sam Allardyce giving the midfielder a free role or that it's simply all the ability he showed as a youngster finally shining through.

Well, whatever it is it's providing the Hammers with some wonderful moments. His strike for the second goal was superb. Like Lamela it showcased another left-footed player cutting in from the right and bending the shot around the keeper. Looks like it's catching on.

I think David Silva played the sort of football against Crystal Palace that won him the Manchester City Player of the Year award a few seasons ago under Roberto Mancini.

He has never been a prolific goalscorer but I get the feeling the Spaniard is definitely developing a taste for the noble art. I don't normally agree with everything Crystal Palace boss Neil Warnock says but he did state in his post-match interview that Silva was the best player on the pitch by a mile and James McArthur's disallowed goal was a travesty. He was right on both counts.

What a strike from the Belgian. Since Christian Benteke returned from injury he has found it difficult to find form but his performance against Manchester United suggests he's back to his best.

Benteke never stopped looking to add to his goal tally much to the annoyance of United. The big question now for Aston Villa and Paul Lambert is can they keep him during the transfer window?

I actually went to Loftus Road to see this game and I couldn't believe my eyes at times. West Brom, who played some wonderful football on occasions, defended like schoolboys and it cost them the game.

Charlie Austin, on the other hand, looks full of confidence in front of goal at the moment and had QPR fans chanting "Charlie for England". Well, I'm not sure about Austin coping with the pressure of playing for his country but he's certainly fearless in front of goal.

Every finish of his hat-trick was superbly taken.