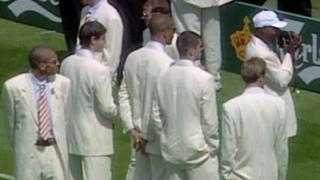 The FA Cup final of 1996 was an unremarkable 1-0 win by Manchester United but will be remembered for the cream-coloured Armani suits worn by the Liverpool players.

Eric Cantona scored the winning goal which sealed the league and cup double for United.