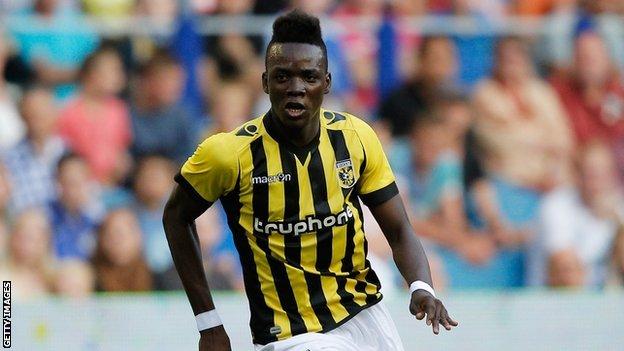 On Thursday, Put cut one player, striker Banou Diawarra, from his preliminary list to finalise the 23-man group he will take to Equatorial Guinea.

Bertrand (pictured), who is on loan at Dutch club Vitesse Arnhem from Chelsea, missed out on the 2013 Nations Cup when Burkina Faso finished as runners-up.

In 2012, aged 16, he was part of the Burkina Faso squad that lost all its matches at the tournament which was co-hosted by Equatorial Guinea and Gabon.

Alain missed out on the Stallions' run to the final in 2013 after picking up a thigh injury in the final group game against Zambia.

He had scored three goals in their opening two games in South Africa to ensure their passage to the quarter-finals.

Jonathan Pitroipa, the Player of the Tournament in 2013, is once again included.

Defender Paul Koulibaly has also retained his squad place, after being recalled for the final qualifier against Angola having missed the previous five ties.

Missing from the squad is experienced goalkeeper Daouda Diakité, who was absent from the qualifying campaign because of injury.

Defender Issoufou Dayo, who plays for AS Vita Club in DR Congo and was part of the squad for the qualifiers, has also been left out.

Burkina Faso are in Group A at the Nations Cup where they will face hosts Equatorial Guinea, Gabon and Congo-Brazzaville.