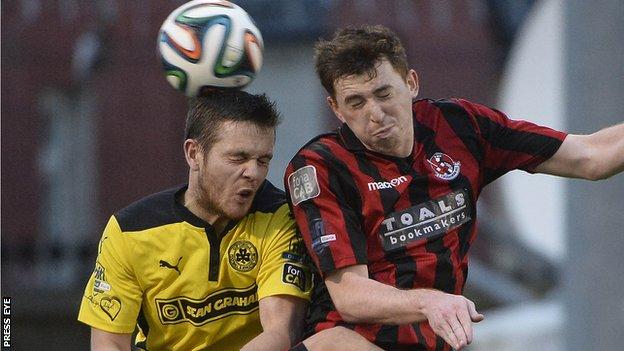 Cliftonville boss Tommy Breslin is determined not to lose more ground in the title race as the Reds prepare to face Crusaders in the Boxing Day derby.

The champions trail leaders Linfield by four points following a 2-1 defeat by Glentoran on Saturday.

"Both teams will be keen to keep in the title mix but if we don't produce better performances our challenge will be short-lived," said Breslin.

Second-placed Cliftonville head the Crues on goal difference going into the top-of-the-table clash at Solitude.

"We were trailing by more points at this stage last year and still won the league so it's no time to panic," added Breslin.

Joel Taggart presents Boxing Day coverage of the Irish Premiership in a Sportsound Special on BBC Radio Ulster medium wave and the BBC Sport website from 14:00 GMT on Friday.

The show will also have regular updates from the other three festive fixtures.

"It will be a great occasion, Solitude will be packed to the rafters and Crusaders are back in the mix after a sticky spell.

"They beat us 4-1 recently but it was never a 4-1 game. The teams have moved on since then and there are no petty vendettas."

Linfield moved clear at the top thanks to a 3-2 win over title rivals Portadown at the weekend although they face a Glens side hitting form.

The Oval victory over the Reds was a third straight league win for Eddie Patterson's young side and they lie in fifth spot.

Glenavon visit Mid-Ulster derby rivals Portadown and they have slipped to seventh after picking up just one point from their last six league games.

Gary Hamilton has bolstered his Mourneview Park squad by signing defender Simon Kelly from Dundalk in an 18-month deal.

The 29-year-old will not be eligible to play for Glenavon until the 3 January game against his former club Ballymena United.

The Sky Blues are also in derby action on Friday with a Warden Street encounter against Coleraine.

"Coleraine beat us last month but we didn't do ourselves justice that day," said United manager Glenn Ferguson.

"However, we've had better results in the last year against them than previously and on any given day anything can happen."

Bottom club Warrenpoint Town can move to within a point of Institute if they win they basement battle at Drumahoe.