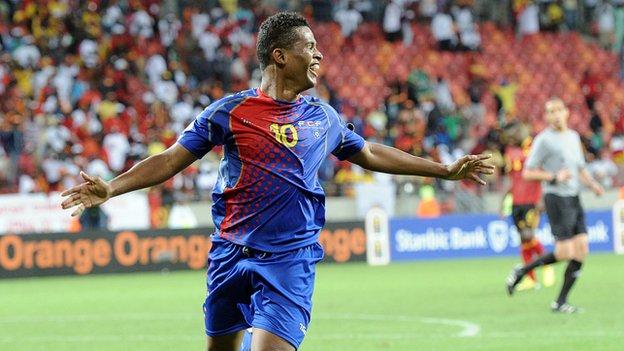 Portuguese coach Rui Aguas' squad is made up of entirely overseas-based players, although two ply their trade in Angola.

With Goalkeeper Vozinha and midfielder Calú on the books of Progresso Sambizanga.

The 2015 squad includes 12 players who were part of the team that reached the quarter-finals in South Africa in 2012.

Striker Heldon (pictured), who scored the injury-time winner against Angola in 2012 that saw Cape Verde qualify for the last eight, is one of those who has another chance to shine at the Nations Cup.

The Blue Sharks will be preparing in Portugal ahead of the finals that kick-off on 17 January.

They have lined up friendlies against Nations Cup hosts Equatorial Guinea, who are also preparing in Lisbon, as well as Portuguese side Estoril although no dates for games have been fixed yet.

They will then take on Claude LeRoy's Congo-Brazzaville, who are also heading to the Nations Cup finals, in the Senegalese capital Dakar on 10 January.

Cape Verde are due to arrive in Equatorial Guinea a day later before kicking off their Group B campaign against Tunisia on 18 January.