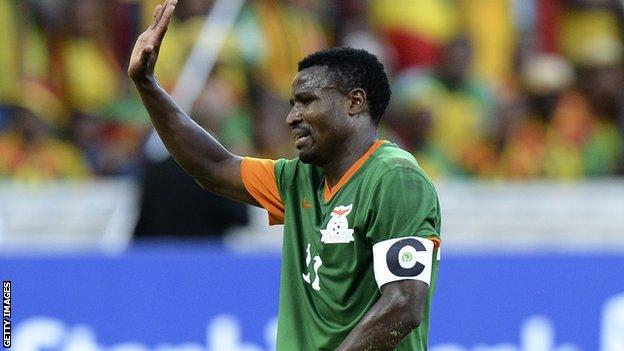 There is no place on the list for former captain Chris Katongo, who lead the side to the 2012 Nations Cup title.

He has not played for Zambia since being thrown out of the squad ahead of October's home qualifier against Niger.

The squad does include 10 players who won the 2012 Nations Cup, when it was played in Gabon and Equatorial Guinea.

It would have been 11 but defender Nyambe Mulenga was ruled out when he broke his leg in a bus accident on 14 December as he travelled to a national team training camp.

His place in the squad has been taken by Aaron Katebe, who plays for Platinum FC in Zimbabwe.

Janza's assistant coach, Chintu Kampamba, was also part of the victorious side two years ago.

The squad will start a training camp on 26 December in Johannesburg, before playing a friendly against South Africa on 4 January.

Zambia begin their Group B campaign on 18 January against DR Congo.