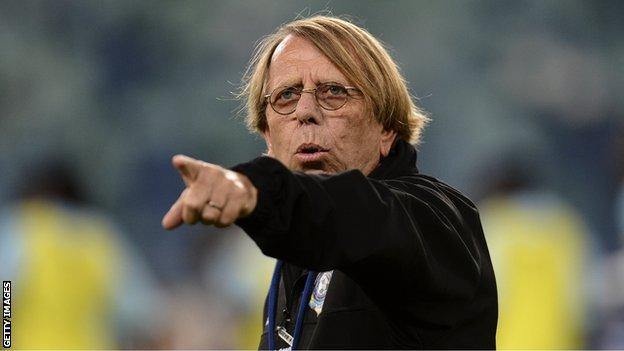 Congo coach Claude LeRoy has finalised his squad for the 2015 Africa Cup of Nations after cutting three players from the provisional list.

The young Belgian-based pair of Scott Bitsindou and Jordan Massengo were left out by LeRoy.

And Bastia midfielder Christopher Maboulou failed to turn up for a pre-tournament training camp in Senegal, the Congolese Football Federation said.

Congo are competing at the Nations Cup finals for the first time since 2000 and play in the tournament's opening fixture against hosts Equatorial Guinea on 17 January in Bata.

Last month LeRoy dropped a number of players including locally-based goalkeeper Joe Ombandza and Lille's Kevin Koubemba, but added uncapped France-born defender Christopher Maboulou, who was not part of the previous provisional squad.

Marseille goalkeeper Brice Samba who has represented France at youth level was omitted after failing to commit to the country of his birth at senior level.

Experienced defender Chris Samba was another to be left out of the preliminary 38-man squad. Samba had rejected a call-up in September for Congo's qualifying double-header against South Africa.

The Red Devils will play the biennial tournament-bound Cape Verde in a warm-up on January 10 at the Léopold Sédar Senghor Stadium in Dakar.

Congo enjoyed their heyday in the 1970s, when the Red Devils beat Mali 3-2 in the final of the 1972 tournament.

Two years later, the holders took eventual finalists Zambia to extra-time in the semi-finals before losing 4-2.