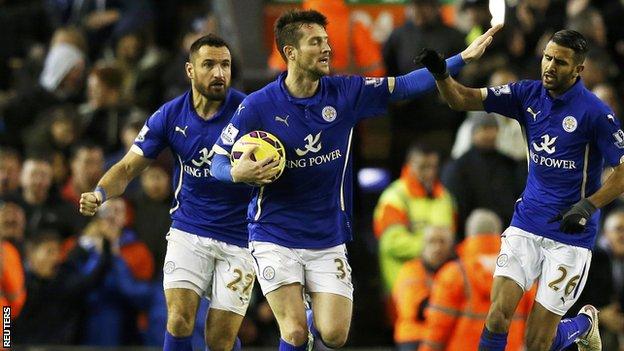 Bottom club Leicester produced a stirring comeback to earn a deserved draw at Anfield and stall Liverpool's advance towards the top four.

Two controversial Steven Gerrard penalties seemed to have set Liverpool on course to victory but the Foxes hit back with two goals in as many minutes.

David Nugent crashed in from Jamie Vardy's chested pass and Jeff Schlupp drilled in from the edge of the box.

Manager Nigel Pearson had called on Leicester to build on Sunday's away win at Hull with another positive result and his players produced a hugely encouraging display that keeps the Foxes within four points of safety.

Liverpool were flattered by their 2-0 half-time lead in a performance devoid of the verve that had captivated Anfield during Monday night's 4-1 demolition of Swansea.

That result had prompted a positive missive from the club's American owners, but Tom Werner and John Henry will no doubt be as dismayed as manager Brendan Rodgers to have seen the Reds play so poorly against opposition they had swept aside at the start of December.

The visitors served notice of their threat in the first minute. A curling free-kick from Riyad Mahrez caught Simon Mignolet by surprise as it cannoned off the near post.

Leicester's bright start continued as Mahrez met Schlupp's low cross from the left but clipped his shot high and wide.

Liverpool made the visitors pay by taking the lead from a contentious Gerrard spot-kick.

As the half wore on, Liverpool began to dictate and were rewarded with another penalty, only slightly less dubious than the first.

Leicester's revival was as spectacular as it was unexpected.

Nugent started it off with a superb dipping strike after Vardy had chested Matty James's pass into his path.

And, moments later, with the hosts still recovering, space opened up for Schlupp to fire a low drive past Mignolet from the edge of the area.

Both sides pushed for a winner in a frenetic closing spell, with substitute Markovic meeting Sterling's cross, only to plant his header into the Kop.

"We missed an opportunity at 2-0 up but I can't be too disappointed. We didn't play well and Leicester did, so a point was about right.

"We've got seven points out of nine, and that keeps us moving forward.

"We said at half-time it was still a dangerous game and once they got momentum they continued to play well.

"We didn't create enough in the final third to warrant three points."

"It was a pulsating game. We tried to win it, nearly did, and you could argue we should have done.

"I'm proud with how my players dealt with the disappointments and we were exceptionally good throughout the game.

"I would like, moving forward, for officials to have the benefit of technology.

"It would clear up indecision, wouldn't create differences within the ground, and would be beneficial to everybody involved in the game."