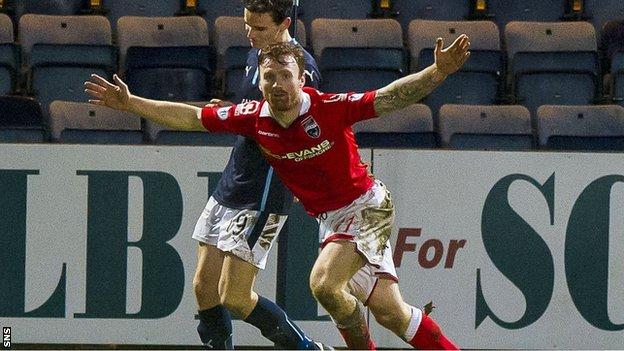 Craig Curran scored on his debut to earn Ross County a precious point at Dens Park and lift them level on points with St Mirren at the foot of the Scottish Premiership.

They had been reduced to 10 men when Terry Dunfield was shown a straight red card for a tackle on Paul McGowan.

But Curran converted a pass by Filip Kiss in 65 minutes to clinch a point.

Dundee had started quickly and McGowan lobbed over the bar in the third minute, but County were rocked when Dunfield was red carded in just seven minutes for a rash tackle on the Dark Blues' playmaker.

Greg Stewart came close for the home side but lifted the ball over both keeper and crossbar.

County did not sit back, though, and Richard Brittain fired in a low free kick which Scott Bain stopped at his right-hand post as the Staggies threatened.

Dundee replied with an Irvine drive which rattled the visitors' side net and David Clarkson was guilty of an incredible miss on the half-hour mark from six yards, firing wide of goal with only Reguero to beat after Stewart had set him up.

Dundee kept the pressure up and Reguero beat a shot away only for sub Tankulic to hit the post with the return shot.

County showed real character to fire level and it was new signing Curran, 25, who stretched to meet a long ball from the right by Kiss, to steer the ball into the net from close range.

McAlister had a great chance from 10 yards as the game drew to a close, but fired it straight at Reguero who gratefully clutched the ball.

Irvine fired a cross-come-shot from the right but Reguero flew from goal to palm the ball to safety.

Dundee continued to sweep forward in waves of attack but 10-man County defended desperately to hold on to grab a very valuable point.