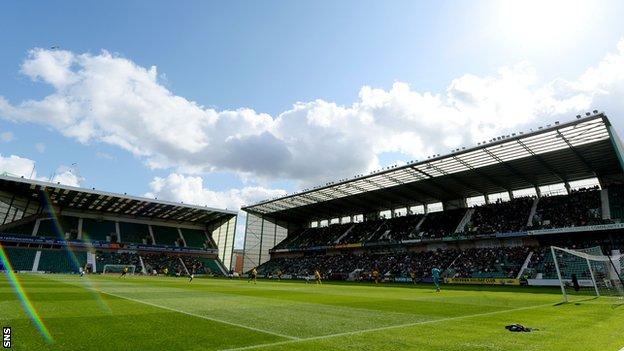 Hibernian have announced plans to allow supporters to purchase shares that would give them up to 51% ownership of the club.

Up to £2.5m worth of shares will be made available and this will dilute the holding company's ownership to less than 50% of the enlarged share capital.

The club announced they are also free of bank debt.

That settlement was funded by new loans provided by the holding company and paid directly into the bank.

Hibernian's current holding company has also agreed to half the club's total debt by converting £4.5m into new shares and to re-structure loans as a single mortgage.

A statement on the Hibs website read: "The club is pleased to confirm that it has agreed a settlement with Bank of Scotland and that the club is now free of bank debt.

"The fixed securities held by the bank over Easter Road Stadium and the Hibernian Training Centre have been released.

"To underpin this commitment to wider supporter involvement and ownership, two new non-executive directors are being elected directly by supporters.

"The board will be sending details of its plans to shareholders in the second week in January in advance of the AGM."

Hibs chairman Rod Petrie said: "Supporters will have the opportunity to contribute directly to their club.

And Petrie explained that the proposals do not mean current owner Sir Tom Farmer will be leaving the club.

"It's not a case of anyone stepping away," Petrie added. "It's a case of opening our arms and welcoming other people on board who have the best interests of the football club at heart, to take us forward and achieve sporting ambition.

"We're going to make enough shares available that supporter shareholders would have over 50% of the football club. That's a model we think can work."

"I think it's daring, exciting and we now need all supporters to rally behind the plan and take the club forward on a united footing. The opportunity exists, and now it's up to all of us to take it and make it work."

"As far as I am concerned, the plan gives people what they have been telling me they want, a much greater stake in their club," he said.

The news was also welcomed by Mike Reilly, chairman of the Hibs Supporters Association.

"I'm absolutely delighted, it's something we've campaigned for since last summer," he told BBC Scotland.

"I'm fairly confident they [the shares] will go, it's what the fans want and it's big for the fans now. They'll need to come out and buy the shares and let us have a controlling interest in the club, which would be out of this world."

The Easter Road outfit beat Rangers 4-0 on Saturday and are currently third in the Scottish Championship table.