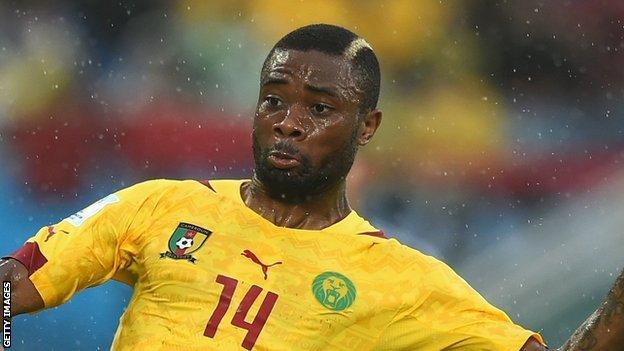 Cameroon's Aurelien Chedjou has been called into the Africa Cup of Nations squad to replace Brice Nlate Ekongolo, who has been ruled out through injury.

Ekongolo, who began training with the Marseille first team only at the start of the season, suffered fractured knees in a car crash in Yaounde on Friday.

The player had been on holiday and has now returned to France for treatment.

Chedjou was left out of Volker Finke's 24-man provisional squad, having been omitted from all the qualifiers.

The 28-year-old Galatasaray defender, who was part of the Indomitable Lions' World Cup squad in the summer and played in two of their three games in Brazil, now has a chance to regain his place.

He is expected to join his team-mates in Yaounde on 5 January ahead of the friendly against Democratic Republic of Congo two days later.

Finke must drop one player from his squad by midnight on the day of the game.

Cameroon will face Mali, Guinea and Ivory Coast in Group D at the 17 January to 8 February tournament in Equatorial Guinea.