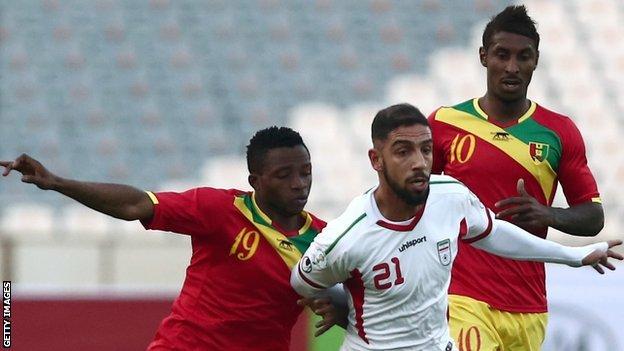 Kevin Constant has been included in Guinea's 23-man Africa Cup of Nations squad despite his strained relationship with the football association.

The Trabzonspor midfielder quit the side in October, blaming "difficult relations" with his team-mates and a lack of resources for the team.

He did not play in the qualifiers, but coach Michel Dussuyer has opted to bring the former AC Milan player back.

Dussuyer has retained only eight members of the 2012 finals squad.

However there is no place in Dussuyer's squad for Alhassane 'Lass' Bangoura after his withdrawal from October's qualifiers against Ghana.

He said he pulled out of the ties because his team-mates at Spanish club Rayo Vallecano were concerned he could be exposed to the deadly Ebola virus, despite the match being hosted in Morocco and not in Guinea.

The French coach has also respected the wishes of Ismael Bangoura not to play at the Nations Cup in order to concentrate on his French club, Nantes.

Guinea will face Cameroon, Ivory Coast and Mali in Group D at the 17 January to 8 February tournament in Equatorial Guinea.